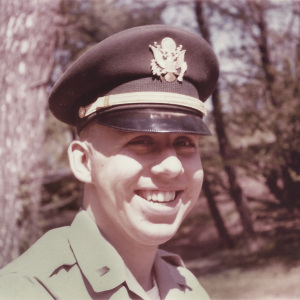 Myron Jerome Poock entered the United States Army on , in , served during the Vietnam War era and reached the rank of Captain before being discharged on July 22, 1968 in Phu Cong Province, Vietnam.

Myron Jerome Poock is buried at St. John's Lutheran in Sumner, Iowa and can be located at 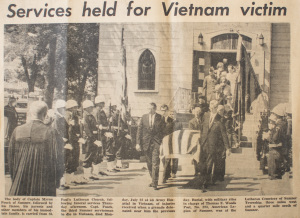 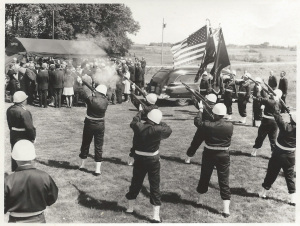 The D.A.R. History Medal was presented to Myron Poock, son of Mr. and Mrs. Walter Poock of Sumner. He is enrolled in Sumner No. 2 School and his teacher is Miss Anna Axberg. The medal is awarded each year by the D.A.R to the rural eighth grade student having the highest average in history.

Twelve members, one leader and one visitor were present at the regular meeting of the Sumner Champs 4-H Club. It was decided to have a swimming party at Fayette. Daryl Priebe is in charge of this committee.

Myron Poock gave a demonstration on “How Much More Power There Is In a Short Cord Rather than a Long Cord.”

A talk on “Weed control” was given by Bob Meier.

Five Students were named to the 4 point honor roll, equivalent to all “A” grades, the second six weeks at the Sumner Community High School. They were Harlan Schwake, senior, and Laura Gade, Joyce Mohr, Elaine Schwerin and Zelda Smith, grade 10.

Those on the 3.5 honor roll, equivalent of at least half “A” and half “B” grades were grade 11 – Kathy Kuethe, Roland Leyh, Dan Strottman and Dennis Schuldt,: grade 10, Caroly Duhrkopf, Susan Lamprecht and Tom Sexton; grade 9, Rosalyn Glick, Karen Kirchhoff and Robert Meyer.

Two Sumner FFA Members To Be Honored at Banquet

Sumner High seniors, Roland Leyh and Jerry Fedeler, are among the 13 FFA members to be honored at the All-agricultural banquet to be held at Iowa State University, Thursday, Nov. 3.

Roland and Jerry were chosen because of their outstanding contribution and leadership in High school and the Future Farmers of America. Leyh is the president of the Sumner Student Council and the FFA Chapter. Fedeler is Chapter Secretary and District Vice-president of the FFA.

Baccalaureate This Sunday Evening At Gymnasium

Delivering the featured address will be L. M. Pennock, Principal of Jefferson School, Rochester, Minn. His address is titled “You Are Equipped.”

Rev. W. B. Tarr, Superintendent of the Western Home of the Evangelical United Brethren Church, Cedar Falls, will present the class sermon as Baccalaurete speaker Sunday night, May 14 at 8 p.m. Title of his address will be “All That Glitters is not Gold.

The senior class will be presented by Supt. M. M. Rogers and presentation of the diplomas will be by Board of Education President, Floyd Robertson.

Senior class officers include: President, Dale Fridley; vice-president, Mary Schnor; secretary, Virginia Rakowicz and Treasurer, Joel Niemann. Class motto is “We Have Crossed The Bay, The Ocean Lies Before Us.” The class colors are red and white and the class flower, the rose.

Members of the Sumner Board of Education besides the President, Floyd Robertson are: L. W. Pipho

Myron J. Poock of Sumner, a Sociology major, is one of 40 Iowa State University upperclassmen to qualify for 1962-63 Alumni and Merit scholarships.

The scholarships range from $100 to $297 and most of the awards were based on high scholarship going to students with the grade average of 3.5 or better (4 is perfect).  A few selections were determined by financial need, the university information service.

Poock is the son of Mr. and Mrs. Walter Poock of Sumner.

The ring bearer was Randall Poock, cousin of the bridegroom, and Jodie Koch, niece of the bride was the flower girl.

Candlelighters were Dennis and Danny Poock, brothers of the bridegroom.

Both Mr. and Mrs. Poock are graduates of the Sumner Community High school. The bride has been employed by the Sumner Gazette. Mr. Poock operates the B and B Service Station in Sumner.

Funeral services will follow a family prayer service at the Emerson-Milnes Funeral Home at 1:30 p.m. The casket will be taken to the Church at noon. Interment with military rites in charge of Thomas E. Woods Post No. 223. American Legion of Sumner. will be in the Lutheran Cemetery of Sumner Township.

The body of Captain Poock arrived in Sumner Monday evening, accompanied by the Military Escort, Captain David Park, who is stationed with the Transportation Corps at Fort Riley, Kan. Captain Park accompanied the body from Oakland Army Base, Oakland, California to Sumner.

Captain Poock died Monday, July 22 at 11:05 at an Army Hospital in Vietnam, where he had been taken after being seriously wounded the day before. The wound was incurred when a grenade detonated while he was in a base camp watching a play.

The original telegram advising Captain Poock’s family that he had been wounded, stated that he had received “a metal fragment wound to the eye penetrating the brain.”

Captain Poock had been in Vietnam for eleven months and was serving as an Advisor to South Vietnamese troops in the Bin Dung Province. He had been assigned to the logistical administration advisory team early this year.

He attended rural elementary school and graduated from Sumner Community High School with the class of 1961. He was an Honor Roll student and was active in school activities, particularly in the Future Farmers of America Chapter, in which he achieved numerous honors.

Following his graduation from High School he attended Iowa State University, graduating with a Bachelor of Science degree on May 29,1965.

His military career actually started while he was still a student at Iowa State University. He was enrolled in the R.O.T.C. training program and was commissioned a Second Lieutenant upon graduation.

Lt. Poock received his basic military training at Fort Riley, Kan. during the summer of 1964. From August 5, 1965 to October 8, 1965, he attended the U. S. Army Adjutant General School at Fort Benjamin Harrison, Indiana. Upon completion he was assigned to the Armed Forces Entrance and Examining Station at Kansas City, Missouri, where he served for two years. While there he was promoted to First Lieutenant.

Lt. Poock re-enlisted for two years and was transferred to Vietnam on August 18, 1967. On January 2, 1968, he was promoted to the rank of Captain and was awarded the Bronze Star Medal for Meritorious Achievement.

He had one month remaining to serve in Vietnam before completing his year of service there.

Captain Poock was preceded in death by his paternal grandfather, maternal grandparents and an infant brother.

Captain Poock is the third young man from this community to die in Vietnam.

The first was PFC Allen Avery, killed in action in early 1966 and the second was Specialist Fourth Class Richard Meighan killed earlier this year.