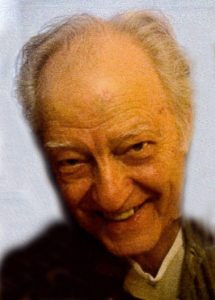 William Eugene Duhl entered the United States Navy on September 18, 1950, in Des Moines, IA, served during the World War II era and reached the rank of Petty Officer Second Class before being discharged on April 30, 1952 in San Diego, CA.

William Eugene Duhl served again in the United States Navy and reached the rank of Petty Officer Third Class before being discharged June 23, 1946 in Bainbridge, MD.

William Eugene Duhl is buried at St. Peter Lutheran Cemetery in Denver, Iowa and can be located at

Bill was born August 1, 1926, in Chillicothe, Ohio, the son of Leeander and Stella (Weese) Duhl. On June 29, 1944, he entered the United States Navy and served in World War II until his discharge on June 23, 1946. On January 16, 1947, he was united in marriage to Mildred “Millie” Gielau at Christ Lutheran Church in Bethesda, Maryland. He was again called to serve his country on September 18, 1950, this time in the Korean War, serving until his honorable discharge of June 24, 1954. He and Millie would make their home in Denver, Evansdale and Jesup, where they raised their two sons, Dean and Richard. Bill was employed over the years for Waterloo Engraving, Waterloo Courier and Waverly Publishing.

Bill loved to fish and was an avid bowler. He was extremely proud of his Navy service, and was honored with a seat on a local Honor Flight to Washington D.C. in 2011, which he attended with his son Richard.

Funeral Services will be held at 10:30 a.m. on Monday, June 12, 2017, at St. Peter Lutheran Church in Denver with Pastor Ron Mathews officiating. Burial will follow in the church cemetery with military rites performed by the Acker-Matthias American Legion Post #653 of Denver. Visitation will be held from 3:00 p.m. to 6:00 p.m. on Sunday, June 11, 2017, at the Kaiser-Corson Funeral Home in Denver and for an hour prior to services at the church on Monday. Memorials may be directed to the family and on-line condolences may be left at www.kaisercorson.com.