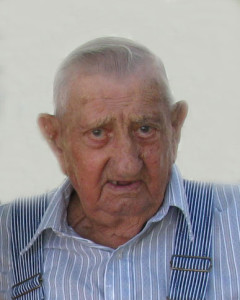 Willard “Bud” Fred Acker entered the United States Army on December 1, 1944, in Fort Snelling, MN, served during the World War II era and reached the rank of Private First Class before being discharged on November 16, 1946 in Fort Sheridan, IL.

Willard “Bud” Fred Acker is buried at Harlington Cemetery in Waverly, IA, Iowa and can be located at

Willard was born on March 12, 1926, the son of Fritz and Luella (Wentworth) Acker in rural Waverly. He attended Briden Country School through the 8th grade. He entered the United States Army on December 1, 1944, and served honorably until his discharge on November 16, 1946. On July 21, 1950, he was united in marriage to Ninabel Catherine Porter in Albert Lea, Minnesota. The couple made their home in Aplington, Iowa and in 1963, they moved to Waverly, Iowa. Bud was a longtime heavy equipment operator in the area and was a member of Local #234 Operating Engineers. He retired from Rampart Corp in Waterloo in 1990. Ninabel passed away in 2009, and Bud continued to live on the farm.

Bud was a member of the Acker Matthias American Legion Post #653 of Denver, Iowa, and the Waverly V.F.W. In his younger years, Bud was a volunteer firefighter for the Waverly Fire Department. He and Ninabel enjoyed socializing with their friends at the Waverly Sale Barn for many years. He enjoyed playing 31 and cribbage with family and friends.

Funeral services will be held on Monday, June 2, 2014 at 10:30 a.m. at Trinity United Methodist Church in Waverly with Pastor Deborah Coble-Wise officiating. Burial will follow in the Harlington Cemetery in Waverly with military rites conducted jointly by the Waverly Honor Guard and the Acker Matthias American Legion Post #653 of Denver, Iowa. Visitation will be held on Sunday from 4 p.m. until 6 p.m. at the Kaiser-Corson Funeral Home in Waverly and also an hour prior to the service on Monday at the church. Memorials may be directed to the family and online condolences for Bud may be left at www.kaisercorson.com.

Kaiser-Corson Funeral Home of Waverly is assisting the family with arrangements. 319-352-1187 – See more at: http://www.kaisercorson.com/obituary/Willard-Bud-Fred-Acker/Waverly-IA/1386933#sthash.tMvZyRYP.dpuf