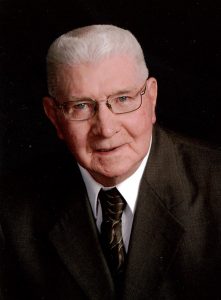 Wesley Richard Sauerbrei entered the United States Army on February 5, 1952, in Des Moines, IA, served during the Korean War era and reached the rank of Corporal before being discharged on January 19, 1954 in Camp Carson, CO.

Wesley Richard Sauerbrei is buried at St. Matthew's Lutheran Cemetery in Readlyn, Iowa and can be located at

Wes was born on September 9, 1931, in Readlyn, Iowa, the son of Walter and Anna (Rathe) Sauerbrei. He was raised in Readlyn where he was baptized on September 27, 1931 and confirmed on April 2, 1944 at St. Matthew’s Lutheran Church. Wes graduated from the Readlyn High School in 1949. Wes entered the United States Army in February of 1952 and was honorably discharged in January of 1954. On November 27, 1952, Wes was united in marriage to Delores Strempke at St. John’s Lutheran Church in Fairbank, Iowa. The couple made their home in Readlyn where Wes owned and operated Sauerbrei Oil Company until 1994 and then worked for the City of Waverly for ten years retiring in 2004.

Wes was a member of St. Matthew Lutheran Church in Readlyn where he served on the church council, Readlyn V.F.W. serving as commander for several years, Readlyn Historical Society serving as President, Readlyn Community Club, and the Readlyn Telephone Company Board of Directors. Wes was honored as the Readlyn Grump in 1997. Wes enjoyed playing cards, visiting, and the Chicago Cubs, however, his greatest enjoyment was family, especially his grandchildren.

Visitation will be held on Sunday, September 16, at Kaiser-Corson Funeral Home in Readlyn where the family will greet friends from 4 to 7 p.m. Funeral services will be held at 10:30 a.m. on Monday, September 17, at St. Matthew’s Lutheran Church in Readlyn. Burial will follow in the church cemetery with Readlyn V.F.W. giving honors. Memorials may be directed to St. Matthew Lutheran Church and online condolences may be left at www.kaisercorson.com. Kaiser-Corson Funeral Home in Readlyn assisting the family with arrangements 319-279-3551.