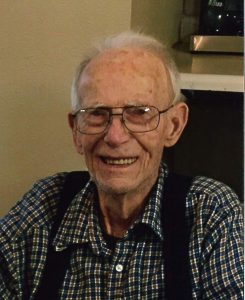 Wendell Charles Harstad entered the United States Army on June 8, 1944, in Camp Dodge, IA, served during the World War II era and reached the rank of Technician Fifth Grade before being discharged on June 18, 1946 in Fort Sheridan, IL.

Wendell Charles Harstad is buried at Harlington Cemetery in Waverly, Iowa and can be located at

Wendell was born on October 26, 1920, at home in rural Plainfield, the son of Ole and Gertrude (Gallagher) Harstad. Wendell loved baseball and played during high school and after graduating from the Plainfield High School in 1938, he played for the Nashua Lions and later the Waverly Bears.

Wendell is survived by his wife Dorothy (Bodeker) Harstad, the couple was married on October 11, 1942.

He was preceded in death by: two sisters, Vivien Jensen and Lois Slater; his daughter, Barbara Kugel; his son, Ronald; a granddaughter, Julie and two great-grandchildren, Dawson Kirk and Megan Mason.

Wendell has been cremated and there will be no formal visitation or funeral. Private graveside services will be held at a future date. Memorials may be directed to Wendell’s family and online condolences may be left at www.kaisercorson.com. Kaiser-Corson Funeral Home in Waverly assisting the family with arrangements. 319-352-1187