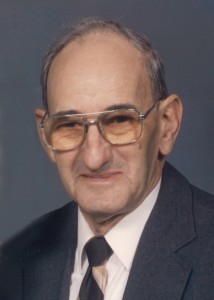 Wayne Howard Picht entered the United States Army on October 25, 1950, in Des Moines, IA, served during the Korean War era and reached the rank of before being discharged on July 31, 1953 in Fort Sheridan, IL.

Wayne Howard Picht is buried at Harlington Cemetery in Waverly, Iowa and can be located at

Wayne H. Picht, 89, of Waverly, died Friday, September 11, 2015, at the Bartels Lutheran Retirement Community in Waverly. Wayne was born July 2, 1926, in Swea City, Iowa, the son of Howard and Myrtle (Kelly) Picht. He graduated from Shell Rock High School in 1942. He then entered the United States Army and served his country until his honorable discharge in 1953. On June 27, 1959, he was united in marriage to Darlys Buenger at St. John Lutheran Church in Waverly. He was employed with Carnation in Waverly for several years and then was the owner/operator for Happy Hour Trailer Sales in Waverly for over 20 years. Wayne was a longtime member of St. John Lutheran Church in Waverly and a longtime leader of the 4-F Sam’s Club camping group. He enjoyed playing cards, especially Pepper, and attending UNI Panther football and basketball games. Wayne is survived by his wife, Darlys of Waverly, two daughters; Joyce (Tom) Barbatti of Cedar Falls, and Julie (Steve) Schwarz of Wenatchee, Washington, one granddaughter, Samantha Limmer of Bloomington, Minnesota, two step grandchildren; Ross Barbatti of Cedar Falls and Tracy Barbatti of Waterloo, three step great grandchildren, one brother, Burton (Jane) Picht of Kirksville, Missouri. He is preceded in death by his parents, sisters, Geneva White and Florence Butterfield and brothers Cecil Picht, Raymond Picht and Gerald Picht. Memorial Services will be held at 10:30 a.m. on Friday, September 18, 2015, at St. John Lutheran Church in Waverly. Visitation will be held from 4:30 p.m to 6:30 p.m. on Thursday, September 17, 2015, at the Kaiser-Corson Funeral Home in Waverly. Memorials may be directed to Bartels Lutheran Retirement Community and on-line condolences may be left at www.kaisercorson.com. Kaiser-Corson Funeral Home in Waverly is in charge of arrangements. 319-352-1187 – See more at: http://www.kaisercorson.com/obituary/Wayne-Howard-Picht/Waverly-IA/1543891#sthash.GZc9YUTk.dpuf