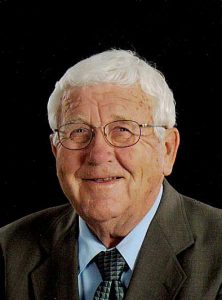 Wayne Allen Platte entered the United States Army on July 1, 1952, in Des Moines, IA, served during the Korean War era and reached the rank of Sergeant before being discharged on June 30, 1954 in Texarkana, TX.

Wayne Allen Platte is buried at Harlington Cemetery in Waverly, Iowa and can be located at

Wayne was born on September 20, 1929, in Waverly, Iowa, the son of Agnes (Krueger) and Richard C. Platte. He was raised in Bremer, Iowa, and graduated from Waverly High School in 1947. He then attended and graduated from the University of Iowa with a degree in accounting. Wayne served in the United States Army from July 1, 1952, until his honorable discharge on June 30, 1954. On January 14, 1956, he was united in marriage to Sara L. Robertson at the First Baptist Church in Karnack, Texas. Wayne and Sara moved to Waverly in 1957 and to Bremer in 1958.

Wayne owned and operated the Bremer Elevator Company until 1994, when he and Sara sold the business and retired. On January 1, 2001, the couple moved into their new home in Waverly. After 47 years of marriage, Sara passed away in June of 2003.

Wayne was a member of St. John Lutheran Church in Waverly. He was a very proud resident of Bremer. He enjoyed playing golf, and supporting the University of Iowa athletics, especially football. But of most importance to Wayne was his grandchildren. They were his pride and joy!

Wayne is survived by two sons, Mark (Krista) Platte of Waverly, and Mitchell Platte of Bremer; two grandchildren Nathan and Kelsey Platte of Waverly; a sister, Marlys Ellison of Waverly; and many nieces and nephews. He was preceded in death by Sara; a son, Thomas Jay Platte in infancy; his parents; and a sister, Arlene Kincaid.

Funeral services will be held on at 10:30 a.m. on Friday, October 7, 2016, at St. John Lutheran Church in Waverly, with Pastor Keith Brustuen officiating. Burial will follow at Harlington Cemetery in Waverly. Visitation will be on Thursday, October 6, 2016 from 4 to 7 p.m. at the Kaiser-Corson Funeral Home in Waverly. Memorials may be directed to glaucoma research (fund #30-519-024) at the University of Iowa Foundation, 1 West Park Road, Iowa City, Iowa, 52246, and online condolences may be left at www.kaisercorson.com. Kaiser-Corson Funeral Home in Waverly is assisting the family. 319-352-1187.