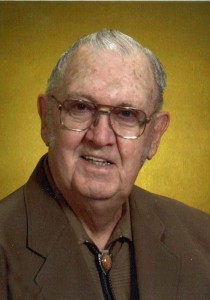 Warren William Fegley entered the United States Army on April 15, 1943, in Omaha, NE, served during the World War II era and reached the rank of First Sergeant before being discharged on February 9, 1946 in Fort Logan, CO.

Warren William Fegley is buried at Harlington Cemetery in Waverly, Iowa and can be located at

Warren William Fegley was born on April 15, 1922 in West Point, Nebraska. He was the older of two sons born to William and Lillian (Solfermoser) Fegley. Lillian was an elementary teacher and housewife. William was a Latin and Shop teacher and, later, an assistant postmaster in West Point. Warren was baptized in the Lutheran Faith on May 21, 1922, at Grace Lutheran Church, West Point, and confirmed at the same church on April 4, 1936. He attended the West Point Schools and graduated from West Point High School on with the Class of 1939. While in school, Warren participated in vocal and instrumental music (percussion) and played on the football team. Upon graduation, Warren enrolled into Midland College in Fremont, Nebraska where he furthered his study of music, played piano, and sang low bass in various vocal ensembles. He graduated in 1943 with a Bachelor of Arts Degree in Music. Warren often sat near Gertrude E. Bickel in his music classes. Gertrude quickly became the love of his life. World War II caused their marriage plans to be postponed.

Warren enlisted in the U.S. Army Reserve Corp on August 14, 1942. He reported for active duty on April 15, 1943. He served at Ft. Leonard Wood, Missouri until October 1944. He was then assigned to duty as a Combat Engineer in the 114th Combat Engineer Division of the 32nd Infantry Division in the Asiatic Pacific Theater of War where he served until being discharged in January 1946. He remained on active reserve status until being honorably discharged on June 8, 1951.

The family moved to Waverly, Iowa in 1956 after Warren accepted a management position at Lutheran Mutual Life Insurance Company. Gertrude accepted teaching contracts – first as a music teacher and then a long time first grade teacher in Shell Rock. Warren furthered his education by earning a fellowship in Life Office Management Association (LOMA) in 1964. Warren and Gertrude were charter members of Redeemer Lutheran Church.

In the early 1970’s, Warren switched careers and became a counselor for the Vocational Rehabilitation Division of the State of Iowa. He earned a Master of Arts Degree from the University of Northern Iowa in 1975 – having the rare pleasure and honor to graduate at the same time that David earned his Bachelor of Arts degree. Warren retired in 1987. After retirement, Warren and Gertrude traveled the world – visiting all 50 states, the six provinces of Canada, and many European countries. They even had the joy of visiting Mt. Voegli – Fegley ancestral land in Switzerland.

Music was an integral part of Warren’s life. He directed and sang in a number of choirs; sang low bass in barbershop quartets; was a long time participant of the Shell Rock Spring Swing Show; and sang barbershop in Waterloo Community Playhouse’s presentation of “The Music Man” in 1992.

Warren and Gertrude were avid bridge players and relished the time spent with their close-knit bridge groups. It was commonplace for family gatherings to include Warren’s favorites: Sour Cream Raisin Pie and family playing Schapfskopf – an old German card game.

Warren was the last surviving member of his original family. He is preceded in death by his parents, brother M. Merle (Margaret) Fegley, his son David, and his step mother.

Memorial Services will be held at 10:30 a.m. on Saturday March 7, 2015, at Redeemer Lutheran Church with burial to follow in the Harlington Cemetery, both in Waverly. Visitation will be held from 4:00 p.m. to 7:00 p.m. on Friday March 6, 2015, at the Kaiser-Corson Funeral Home in Waverly and for an hour before services at the church on Saturday. Memorials may be directed to Redeemer Lutheran Church, Bartels Lutheran Retirement Community, the Shell Rock Music Association, or the Cedar Valley Hospice and on-line condolences may be left at www.kaisercorson.com.
Kaiser-Corson Funeral Home in Waverly is in charge of arrangements. 319-352-1187.