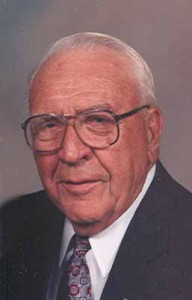 Vernon Lloyd Moeller entered the United States Army on July 10, 1941, in Des Moines, IA, served during the World War II era and reached the rank of before being discharged on October 12, 1945 in Camp Gordon Johnston, FL.

Vernon Lloyd Moeller is buried at St. Peter Lutheran Cemetery in Denver, IA, Iowa and can be located at

Vern was born June 13, 1919, the son of Alvin and Hilda (Oltrogge) Moeller on the Prestein Farm in Denver. He was baptized June 29, 1919, at St. Paul’s United Church of Christ in Denver and confirmed April 5, 1936, at St. Peter Lutheran Church in Denver. He attended Jefferson #3 country school and graduated from Denver High School in 1936. Vern worked in the painting trade until July 8, 1941, when he was drafted into military service. On June 10, 1943, he was united in marriage to Margaret “Marge” Wehling at St. Matthew Lutheran Church in Readlyn. To this union two sons were born. Vern was honorably discharged from the Army on October 10, 1945, and worked for Michael Paint Company until 1963. He began selling insurance for Lutheran Mutual Life and then became an agent for Readlyn Mutual Insurance in 1965. Vern retired in 1981.

Vern was a longtime, faithful member of St. Peter Lutheran Church in Denver where he served on the church council and as council president. He served on the Denver City Council from 1960 to 1967 and was mayor of Denver from 1967 to 1971. Vern was a member of the Bremer County Extension Council beginning in the 1960s. He enjoyed raising fancy chickens and ornamental pheasants and was a club leader for the Jefferson Superiors 4-H Club in the 1960s. Vern was happiest while farming and being in the country. He enjoyed a good game of cards and having coffee with his friends. His greatest loves were his children and grandchildren.

Funeral services will be held at 11:00 a.m. on Saturday, January 2, 2010, at St. Peter Lutheran Church in Denver with Pastor Victoria Shepherd and Pastor Sarah Stadler-Ammon officiating. Burial will be in St. Peter Lutheran Cemetery, with military rites conducted by the Acker-Matthias American Legion Post #653 of Denver. Visitation will be from 4:00 p.m. to 7:00 p.m. on Friday, January 1, 2010, at Kaiser-Corson Funeral Home in Denver and for one hour prior to services at the church on Saturday. Memorials may be directed to the family and on-line condolences may be left at www.kaisercorson.com.

Kaiser-Corson Funeral Home in Denver is in charge of arrangements. 319-984-5379 – See more at: http://www.kaisercorson.com/obituary/Vernon-Lloyd-Moeller/Denver-IA/740706#sthash.gDz9RzKY.dpuf