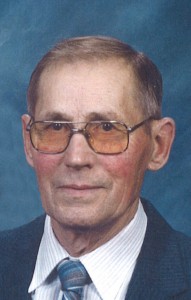 Vernon Carl Brandt entered the United States Army on December 2, 1952, in Des Moines, IA, served during the Korean War era and reached the rank of Private First Class before being discharged on December 1, 1954 in Fort Carson, CO.

Vernon Carl Brandt is buried at Harlington Cemetery in Waverly, Iowa and can be located at

Vernon was born on October 23, 1931, in Readlyn, Iowa, the son of John and Amanda (Theis) Brandt. He was raised in rural Denver, Iowa and attended school in the Denver area. Vernon then started farming with his father. In 1952, he entered the United States Army serving in the Korean War, earning the Bronze Star. He was honorably discharged in 1954 and returned to Denver where he continued helping on the family farm. On May 30, 1960, Vernon was united in marriage to Loretta Shannon at Immaculate Conception Catholic Church in Fairbank. The couple farmed in the Fairbank and Waverly areas for a short time. In 1965, Vernon started his career in the construction industry working for Ramker Construction, Oberheu Construction, and Cousin Custom Builders all of Waverly, retiring in 1997.

Vernon was a member of St. Mary Catholic Church in Waverly and Janesville AMVET Post #0522. He enjoyed flowers and plant gardening, however, what he enjoyed most was having his grandchildren visit.

Visitation will be held on Sunday, March 8, at Kaiser-Corson Funeral Home in Waverly where the family will greet friends from 4 to 7 p.m. Mass of Christian Burial will be held at 10:30 a.m. on Monday, March 9, at St. Mary Catholic Church in Waverly with Father Dave Schatz officiating. Burial will follow at Harlington Cemetery in Waverly with Janesville American Legion Post #0522 giving honors. Memorials may be directed to Care Initiatives Hospice in Cedar Falls and online condolences may be left at www.kaisercorson.com 319-352-1187