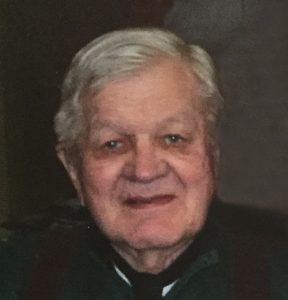 Vernon Arthur Oberheu entered the United States Army on April 30, 1953, in Des Moines, IA, served during the Korean War era and reached the rank of Private before being discharged on April 25, 1956 in Fort Sheridan, IL.

Vernon Arthur Oberheu is buried at Harlington Cemetery in Ellison Bay, WI, Iowa and can be located at

Vernon A. Oberheu, 84, of Waverly, Iowa, passed away quietly at the Iowa Veterans Home in Marshalltown on Sunday, November 26, 2017.

Vernon was born on March 13, 1933 in Waverly, Iowa, the son of Arnold and Hilda (Roloff) Oberheu.

Vernon entered the United States Army during the Korean Conflict on April 30, 1953, and was honorably discharged on April 25, 1956. On February 14, 1955, he was united in marriage to Donna Kay Krause in Kansas City, Missouri. The couple made their home in Waverly. They were active members of Trinity United Methodist Church in Waverly, the Waverly Area Veterans Auxiliary and many community activities.

Vernon is survived by his sister, Norma (Oberheu) DeLavergne, and brothers, Richard Oberheu, and Howard (JoAnn) Oberheu, along with several nieces and nephews. He was proceeded in death by his wife, Donna Kay, of over 58 years, his parents, Arnold and Hilda Oberheu, a brother, Robert Oberheu, a sister-in-law, Marilyn Oberheu and a brother-in-law, Rex DeLavergne.

Burial will be held in Harlington Cemetery in Waverly at a later date. Memorials may be directed to the Iowa Veterans Home in Marshalltown. Condolences for Vernon may be left at www.kaisercorson.com. Kaiser-Corson Funeral Home in Waverly is assisting the family 319-352-1187.