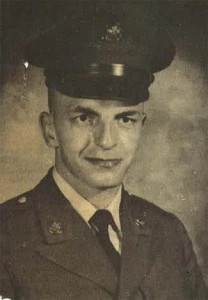 Verlyn Carl Bruns entered the United States Army on May 6, 1969, in Camp Dodge, IA, served during the Vietnam War era and reached the rank of Corporal before being discharged on January 11, 1970 in Vietnam.

Verlyn Carl Bruns is buried at Harlington in Waverly, Iowa and can be located at Section A, Lot 20, Grave 3

[Headstone reads: IOWA CPL 21 INF 196 LT INF BDE VIETNAM BSM PH. “There is a circle with a cross above the name.”]

DENVER-Miss Lois Jane Kirchoff, daughter of Mr. and Mrs. A. E. Kirchoff, became the bride of Gerald A. Bruns, son of Mrs. Carl Bruns, Waverly, on Sunday at 2 p.m.

After a brief wedding trip, the couple will be at home near Waverly. The groom is employed by the B and B Cooperative.

The Daily Record in Brief

Mr. and Mrs. Frank Foster, 436 Bratnober St., are announcing the engagement of their daughter, Shirley, to Verlyn Bruns, son of Mrs. Lucille Bruns of Waverly.

The bride-elect is a senior at East High School. Her fiance is employed at Carnation Co. in Waverly.

The couple plans a Nov. 10 wedding at 2 p.m. in Immanuel Lutheran Church.

Announcement is being made of the Sunday wedding of Miss Shirley Foster and Verlyn Bruns. The Rev. Eugene Kramer officiated at the 2 p.m. ceremony in the Immanuel Lutheran Church.

Parents of the couple are Mr. and Mrs. Frank B. Foster, 436 Bratnober St., and Mrs. Lucille Bruns of Waverly.

Attending her sister as matron of honor was Mrs. William Mettlin of Cedar Falls.

Mrs. Foster was in the 12th grade at East High School, and Mr. Foster is employed at the Carnation Company in Waverly, where they are making their home.

In the announcement of the wedding of Miss Shirley Foster and Verlyn Bruns in Friday’s Courier it should have read Mrs. Bruns was a senior at East High School and Mr. Bruns is employed by the Carnation Company in Waverly.

WASHINGTON (AP) – The death in Vietnam of Army Pfc. Verlyn C. Bruns, 24, of Waverly, was announced Thursday by the Defense Department.

Bruns, whose wife, Shirley, lives in rural Waverly had been in the Army since last April and in Vietnam for about three months.

WAVERLY – Word has been received here of the death of Army PFC Verlyn Bruns, 23, of Waverly, who was killed in Vietnam Saturday, Jan. 10.

Services are pending at the Cleveland Funeral Home in Waverly. He is survived by his widow, Shirley, his mother, Mrs. Lucille Bruns, and a brother, Gerald, all of Waverly and two sisters, Mrs. Orlin Lewis of Dunkerton and Mrs. Jerry Baker of Yatkey, Hampshire, England.

Bruns entered the service in April 1968 and had been stationed in Vietnam for three months.

WAVERLY – Medals and badges awarded posthumously to Cpl. Verlyn Carl Bruns, who was killed in Vietnam Jan. 11, were received recently by his mother, Mrs. Lucille Bruns of rural Waverly.

Bruns was killed while his unit was dug in for the night near the village of Cam An about 15 miles north of Tam Ky city in Quang Tri Province. The unit was hit by enemy forces.

Bruns entered the service on May 5, 1969, receiving his basic training [at] Fort Polk, La., and was sent to Vietnam on Oct. 11, 1969. He had been in Vietnam three months serving in a reconnaisance unit of the American Division.