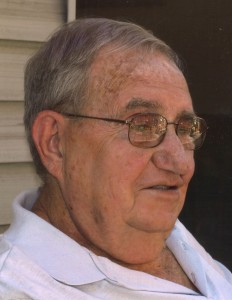 Timothy Edward Sullivan entered the United States Army on April 14, 1945, in Fort Snelling, MN, served during the World War II era and reached the rank of Technician Fourth Grade before being discharged on December 5, 1946 in Camp Beale, CA.

Timothy Edward Sullivan is buried at Harlington Cemetery in Waverly, Iowa and can be located at

Tim was born on December 18, 1925, in Frederick, Wisconsin, the son of John and Frances (Engelhart) Sullivan. He was raised in Waverly, Iowa, where he attended the Waverly High School graduating in May of 1944. Tim then entered the United States Army serving in the South Pacific Occupation of Japan. On December 5, 1946, he was honorably discharged and returned to Waverly. On November 23, 1950, Tim was united in marriage to Darlyce Seamon at the Little Brown Church in Nashua, Iowa. He would spend the next thirty four years working at Shield-Bantam/Terex crane starting out as a mechanic and working his way to a supervisor position.

Tim enjoyed camping, woodworking, country music, and square dancing, however, what he enjoyed most was spending time with his family, especially his grandchildren.

Visitation will be held on Wednesday, April 29, at the Kaiser-Corson Funeral Home where the family will greet friends from 4 to 8 p.m. Funeral services will be held at 1:00 p.m. on Thursday, April 30, at the Kaiser-Corson Funeral Home in Waverly. Burial will follow at Harlington Cemetery in Waverly with the Waverly Area Veterans Group giving honors. Memorials may be directed to Tim’s family and online condolences may be left at www.kaisercorson.com. 319-352-1187