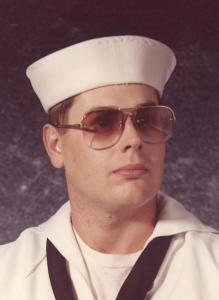 Thomas William Meyne entered the United States Navy on July 28, 1981, in , served during the Peacetime era and reached the rank of Machinist Mate Second Class before being discharged on March 27, 1987 in .

Thomas William Meyne is buried at St. Peter's Lutheran Cemetery in Denver, IA, Iowa and can be located at

Tom was born in Des Moines, Iowa, the son of Willard and Marie (Kurtt) Meyne. He was raised in Denver, Iowa, where he was baptized in May of 1961 at St. John’s Lutheran Church, Maxfield and Confirmed in 1975 at St. Peter’s Lutheran Church in Denver. Tom attended Denver Public Schools and graduated from Denver High School in 1979. He served in the United States Navy from 1981 to 1987. Tom then attended Northeast Nebraska Community College in Norfolk, Nebraska graduating in 1990. During his life Tom worked as a video security specialist for President Casinos and as a bartender at the AMVETS in Waverly.

Tom was a member of AMVETS in Waverly and the Denver American Legion. His enjoyments included playing pool, woodworking, and reading.

Funeral services will be held at 10:30 a.m. on Monday, November 11, at St. Peter’s Lutheran Church in Denver. Burial will follow at St. Peter’s Lutheran Cemetery in Denver with Acker – Mathias American Legion Post #0653 giving honors. Visitation will be held on Sunday, November 10, at Kaiser-Corson Funeral Home in Waverly where family will greet friends from 2 to 5 p.m. Memorials may be directed to Cedar Valley Hospice and online condolences may be left at www.kaisercorson.com. 319-352-1187 – See more at: http://www.kaisercorson.com/obituary/Thomas-William-Meyne/Cedar-Falls-IA/1312325#sthash.pIiQ5YBZ.dpuf