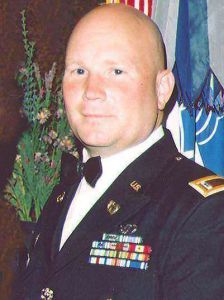 Thomas Henry Burrier entered the United States Army on October 9, 1986, in Waverly, IA, served during the Persian Gulf War era and reached the rank of Chief Warrant Officer 3 before being discharged on March 13, 2006 in Fairfax County, VA.

Tom was born on December 20, 1966 in Waterloo, Iowa, the son of Leonard and Donna (Voigts) Burrier. He was baptized on January 15, 1967 and later confirmed on October 31, 1982 both at St. Paul’s Lutheran Church, Waverly. He attended the Waverly-Shell Rock School System and graduated from high school in 1985. Tom then attended Wartburg College for one year before entering the United States Army. On July 13, 1990 he was united in marriage to Cathy Chapman in California. In 1992 he was stationed at Vint Hill Farms, Virginia, and in 1996 he was transferred to Germany where they lived until his transfer to Fort Bragg, North Carolina in1998. In 2000 he was transferred to England and while there he earned his bachelor’s degree from the University of Maryland. In July of 2005 they returned to the United States where Tom was pursuing a Master’s Degree in Strategic Intelligence. He was due to graduate with his class in August of 2006. His goal was to retire from the military, spend more time with his family and to continue to serve his country in the political realm.

Services will be 11:00 AM on Monday, March 20, 2006 at St. Paul’s Lutheran Church in Waverly with military honors at Harlington Cemetery, Waverly, where he will be buried following cremation. Visitation will be on Sunday from 3:00pm until 7:00pm at the Kaiser-Corson Funeral Home, Waverly. Memorials may be directed to the family for a later designation.