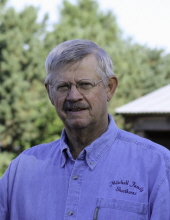 Thomas Dewey Mitchell entered the United States Air Force on August 19, 1969, in Des Moines, IA, served during the Vietnam War era and reached the rank of Airman First Class before being discharged on March 10, 1971 in Colorado Springs, CO.

Thomas Dewey Mitchell is buried at At home in Waverly, Iowa and can be located at

Thomas D. Mitchell, 73, of Waverly, Iowa, passed away on Tuesday, April 28, 2020 at his home in Waverly from pancreatic cancer.

Thomas was born on November 24, 1946, in Waterloo, Iowa, the son of Elsie Marie (Lorenzen) and Herald Claude Mitchell. Tom graduated from Dysart-Geneseo High School and then earned his accounting degree from the University of Northern Iowa. He worked as a CPA in Waverly and then for Hurd Insurance from 1973 – 1982. On June 1, 1982, Tom opened Mitchell Accounting in Clarksville; he was semi-retired at the time of his passing. On May 5, 1973, Tom was united in marriage to Janice Louise Deike in Waverly. Tom served in the United States Air Force during the Vietnam era until honorably discharged.

Tom was a member of First United Church of Christ-Pleasant Valley and serves as Treasurer for the Clarksville Nursing Home Board, Butler County Fair Board and Iowa Shorthorn Association. He also served on the board for Iowa State Bank, Iowa Junior Beef Breeds and was a member of the Butler County Cattlemen. Tom’s passion was raising and showing purebred shorthorn cattle. Over the years he was a mentor and positive influence on youth interested in show cattle.

According to his wishes, Tom’s body has been cremated. Tom’s family will host a Celebration of Life Memorial at a later date. Memorials may be directed to Tom’s family. Kaiser-Corson Funerl Home in Waverly is assisting the family. 319-352-1187