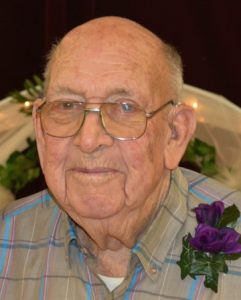 Sandie Robert Cooper entered the United States Navy on September 26, 1943, in , served during the World War II era and reached the rank of Electrician's Mate Third Class before being discharged on January 14, 1946 in Minneapolis, MN.

Sandie Robert Cooper is buried at Horton Cemetery in Horton, Iowa and can be located at

Funeral Services will be held at 10:00 a.m. Thursday, November 2, 2017, at Faith Evangelical Church in Sumner with Rev. David Barner officiating. Burial will follow at Horton Cemetery rural Waverly with Military rites provided by Thomas E. Woods Post #223, American Legion of Sumner. Visitation will be held 4:00 p.m. to 8:00 p.m. Wednesday November 1st, at Becker-Milnes Funeral Home in Sumner and for one hour preceding the service at the church on Thursday. Memorials may be made in Bob’s name to Faith Evangelical Church in Sumner.

Sandie Robert son of Hugh and Sadie Jackson Cooper was born July 22, 1925, at the family’s home rural Horton. He received his early education in the rural Horton Country Schools. Bob was drafted for World War II in 1943, and served in the United States Navy in the Pacific Theater. He served on the U.S.S. Callaghan which was involved in eight major battles, two of which were Iwo Jima and Okinawa. On July 29, 1945, Bob’s life was nearly taken by a Kamikaze Plane which sunk the U.S.S. Callaghan. He returned home after being honorably discharged on January 14, 1946. On March 2, 1947, Bob was united in marriage with Pearl Heinmiller at St. John Lutheran Parsonage in Waverly. The couple made their home in Plainfield, Readlyn, and Denver prior to moving to Sumner in 1974. On March 10, 1963, Bob along with some of his children was baptized at St. John’s Lutheran Church Maxfield Township. Bob was in construction and farming for his professional life and retired as a bridge engineer. He was a long time member of Faith Evangelical Church, where he was very active, serving on church council and instrumental in the building committee, and Thomas E. Woods Post #223, American Legion of Sumner. Bob was also a proud member of the U.S.S. Callaghan Survivors Association. He along with other survivors just attended the 70th anniversary celebration in Des Moines in 2015. Bob enjoyed raising pigeons and canaries.

In addition to his parents, he was preceded in death by his wife, Pearl who died on November 16, 2001; son, Charles Robert Cooper who died in infancy; one grandson, Joshua Cooper; and one brother, James Cooper.