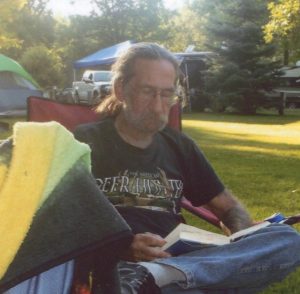 Samuel Elmer Nelson entered the United States Army on January 28, 1971, in Des Moines, IA, served during the Vietnam War era and reached the rank of Specialist Four before being discharged on January 20, 1973 in Fort Dix, NJ.

Samuel Elmer Nelson is buried at St. Johns Lutheran Cemetery in Sumner, Iowa and can be located at

Memorial services will be held 10:30 a.m., Monday, October 30, 2017, at St. John Lutheran Church in Sumner with Rev. Curt Schneider officiating. Burial will follow at the church cemetery with military rites by Thomas E. Woods Post #223, American Legion of Sumner. Visitation will be held for one hour preceding the service at the church on Monday. Memorials may be made to the family for later designation. Becker-Milnes Funeral Home in Sumner is assisting Samuel’s family.

Samuel Elmer son of Duyane and Lula Wright Nelson was born October 4, 1953, in Waterloo, Iowa. He was baptized and confirmed in the Presbyterian Faith. Sam received his education in the Waterloo Schools, graduating from Waterloo West High School in 1971. During his teenage years, he was adopted by his grandparents, Elmer and Goldie Nelson. Following high school, Sam served in the United States Army from 1972-1974, during the Vietnam Conflict. Upon his honorable discharge, he returned to the Waterloo area. Sam was employed as a semi truck driver for Warren Transport, Lawless Trucking, and John Deere. He moved to Texas, and while there was a self employed semi truck driver. In 1996, he was united in marriage with Tammy Randall in Sumner by Rev. John Sorenson. The couple made their home in Sumner. Sam was a member of St. John Lutheran Church in Sumner and Thomas E. Woods Post # 223, American Legion of Sumner. He enjoyed fishing, hunting, and camping in Decorah with his wife, Tammy.

He is survived by his wife, Tammy of Sumner; one son, Wade Nelson; eight step-children; two step-grandchildren; mother, Lula Bowen of Virginia; several brothers and sisters; and mother and father-in-law, Juanita and Jerry Prideaux of Sumner.

He was preceded in death by his adopted parents, father, step-mother, brother Danny Nelson; and step-son, Raymond Randall.