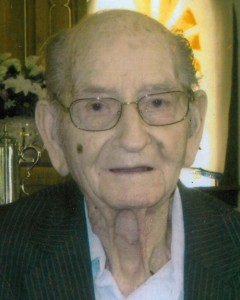 Ruben Schnurstein entered the United States Army Air Corps on April 7, 1942, in Fort Des Moines, IA, served during the World War II era and reached the rank of Technician Fifth Grade before being discharged on August 27, 1945 in Fort Leavenworth, KS.

Ruben Schnurstein is buried at St. John's United Church of Christ - Siegel in Waverly, Iowa and can be located at

Ruben Schnurstein, 98, of Ionia, Iowa passed away on Wednesday, January 28, 2015 at the Manor Care in Waterloo, Iowa.

Ruben Schnurstein was born on November 2, 1916, the son of Eduard and Anna (Biermann) Schnurstein in rural Bremer County. He attended country school thru the 8th grade. He entered the Army Air Corp on April 7, 1942, serving during W.W. II until his discharge on August 27, 1945. Ruben was united in marriage to Mabel Goranson. He farmed in rural Bremer County until retiring in 1975. At which time he moved to Frederika.

He was a member of St. John’s United Church of Christ – Siegel.

Funeral services will be held on Saturday, January 31, 2015 at 10:30 am at St. John United Church of Christ – Siegel with Pastor Eugene Walther officiating. Burial will follow in the church cemetery. Visitation will be on Friday, January 30, 2015 from 4:00 pm until 7:00 pm at the Kaiser-Corson Funeral Home in Waverly and also an hour prior to the service on Saturday at the church. Memorials may be directed to the family and online condolences for Ruben may be left at www.kaisercorson.com.

Kaiser-Corson Funeral Home of Waverly is assisting the family with arrangements for Ruben Schnurstein. 352-1187 – See more at: http://www.kaisercorson.com/obituary/Ruben-Schnurstein/Ionia-IA/1475734#sthash.1DysvmXU.dpuf