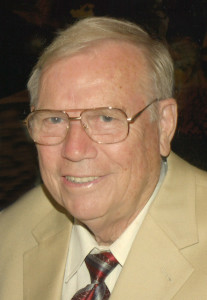 Romaine “Bud” Junior Schaefer entered the United States Army on June 27, 1945, in Fort Snelling, MN, served during the World War II era and reached the rank of Technician Fourth Grade before being discharged on November 26, 1946 in Washington D.C..

Romaine “Bud” Junior Schaefer is buried at Harlington Cemetery in Waverly, IA, Iowa and can be located at

Bud was born December 31, 1926, in Denver, Iowa, the son of Otto and Frida (Arns) Schaefer. He graduated from Waverly High School in 1945. He immediately entered the United States Army where he served until his honorable discharge in November of 1946. On September 13, 1947, Bud was united in marriage to Ella Mae McMullen in Waverly. He was employed with Carnation and Swiss Valley Dairies as well as at the Carnation Plant. Ella Mae passed away in 1975. In 1978, Bud married Helen Ann Ellsworth in Waverly, Iowa. He retired from Carnation in 1987. Helen passed away in 1995. He continued to live in Waverly until entering the nursing home in 2012.

Bud was a fun loving man who always wore a smile. He was a member of the Amvets Post #79 and American Legion in Waverly. He enjoyed camping and traveling, especially to his winter home in Fort Pierce, Florida. He loved cars and was known to trade up to a different model every few months. He kept a close ear on the police scanner and wasn’t afraid to venture out and see what was happening around town.

Funeral services will be held at 1:00 p.m. on Thursday, July 3, 2014, at Open Bible Church in Waverly with Pastor Matt Miller officiating. Burial will follow in the Harlington Cemetery with Military Honors provided by the Waverly Area Veterans Honor Guard. Visitation will be held one hour prior to the service at the church on Thursday. Memorials may be directed to Cedar Valley Hospice. Online condolences may be left at www.kaisercorson.com

Kaiser-Corson Funeral Home in Waverly is in charge of arrangements. 319-352-1187 – See more at: http://www.kaisercorson.com/obituary/Romaine-Bud-Junior-Schaefer/Waverly-IA/1395374#sthash.cxqE5h38.dpuf