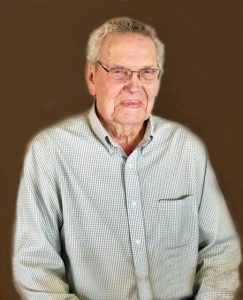 Rollis Gunder Jensen entered the United States Navy on May 21, 1943, in Westgate, IA, served during the World War II era and reached the rank of Carpenter's Mate Second Class before being discharged on January 27, 1946 in Great Lakes, IL.

Rollis Gunder Jensen is buried at St. Peter Lutheran Cemetery in Denver, Iowa and can be located at

Rollis was born on July 30, 1922, in Oran, Iowa, the son of Oscar and Josephine (Rueckert) Jensen. He was confirmed on April 14, 1935, at St. John’s Evangelical Lutheran in Fairbank. He graduated from Bremer-Fayette Consolidated High School in 1939. He served in the United States Navy Seebees from May of 1943 to January of 1946. He was united in marriage to Velda Pipho on June 25, 1950, at Zion Lutheran Church in Oelwein. Rollis began his career as a carpenter. After serving in the Seebees he returned to resume work as a carpenter with his favorite being finish carpentry. In 1963, he served as interim Postmaster in Denver, later being appointed as Postmaster there. He served in that capacity from 1963 until his retirement in March of 1990.

Rollis was a member of St Peter Lutheran Church. He served on the Denver Public Library Board, the board that established the Denver Sunset Home, along with various city and church boards. He was a member of the Denver American Legion Post #653 for more than 60 years.

Funeral services will be held at 10:30 a.m. on Saturday, February 2, 2019, at St. Peter Lutheran Church in Denver. Burial will follow at St. Peter Cemetery in Denver. Military rites at the grave will be conducted by Acker Matthias American Legion Post # 653. Visitation will be held from 4:00 to 7:00 p.m. on Friday at the Kaiser-Corson Funeral Home in Denver and for one hour prior to services on Saturday at the church. Memorials may be directed to St. Peter’s Lutheran Church, His Hands Oran Food Pantry or to the donor’s choice. Online condolences may be left at www.kaisercorson.com.

Kaiser-Corson Funeral Home in Denver is assisting the family with arrangements. 319-984-5379