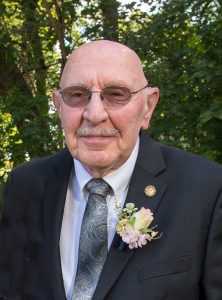 Roger William Metzger entered the United States Marine Corps on December 21, 1955, in Milwaukee, WI, served during the Vietnam War era and reached the rank of Staff Sergeant before being discharged on August 31, 1976 in Waterloo, IA.

Roger William Metzger is buried at Harlington Cemetery in Waverly, Iowa and can be located at

Roger William Metzger, 80, of Waverly, Iowa, and formerly of Milwaukee, Wisconsin, passed away on Sunday evening, 11 November 2018 (Veterans Day) at the University of Iowa Hospitals and Clinics following a brief illness.

Roger was born on 7 September 1938, in Milwaukee, Wisconsin, the son of William B. and Emma (Wiederhold) Metzger. He attended the Boys Technical High School in Milwaukee and in December of 1955, while a student he joined the U.S. Marine reserves. Roger graduated from high school in January of 1957 and on 14 September 1957, he was united in marriage to Judith D. Reinke in Milwaukee. With Roger’s military career the family lived in California, Virginia, Arizona, moving to Waverly in 1973. In February of 1957, Roger went to boot camp in MCRD, California and in April of 1957, Roger was discharged from the reserves and enlisted as a regular Marine, serving on the U.S.S. Shangri-La Aircraft Carrier in 1957-58, served overseas and a tour and a half in Vietnam. Roger transferred to the Fleet Marine Corps Reserves based in Waterloo, Iowa, where he retired from the service on 31 August 1976. Following his 21 years of service to his country in the U.S. Marine Corps, Roger then worked for Dales DX Service Station in Waverly from 1976 until he retired in 2001.

Roger was baptized in October of 2014 in Waverly and is currently a member of St. Paul’s Lutheran Church. He was a longtime member of the Marine Corps League, American Legion Post #176 and V.F.W. Post #2208 (now known as the Waverly Area Veterans Post) where he held several offices, currently was on the Board of Directors and responsible for all honor and color guards. In his spare time Roger enjoyed reading, shooting, and spending time with his family and friends. Roger was a very faithful member of the Waverly Area Veterans Honor Guard – helping pay respect to many many veterans that have gone before us.

Roger is survived by his loving wife, Judy Metzger of Waverly, Iowa; two sons, William (Deb) Metzger of Waterloo, Iowa, Douglas (Tammy) Metzger of Norwalk, Iowa; one daughter, Sherri (Mike) Boomgarden of Allison, Iowa; 11 grandchildren; 11 great grandchildren; 1 great great grandchild; and a sister, Ruth Metzger of Milwaukee. He was preceded in death by his parents; a grandson William; granddaughter Ashleigh; a brother and his wife, Bernie and Deanne; a sister and her husband, Irene and Bob Zuback; his mother and father-in-law; 1 brother-in-law and a sister-in-law.

Funeral services will be held on Thursday, 15 November 2018 at 10:30 a.m. at St. Paul’s Lutheran Church and School with Pastor Arthur Bergren officiating. Burial will be in Harlington Cemetery in Waverly with military graveside rites conducted by the Waverly Area Veterans Honor Guard. Public visitation will be held on Wednesday, 14 November 2018 at the Kaiser-Corson Funeral Home in Waverly. Memorials may be directed to the Marine Corps League Detachment #1241, Waverly, Iowa. Online condolences for Roger’s family may be left at www.kaisercorson.com. Kaiser-Corson Funeral Home in Waverly is assisting the family. 319-352-1187