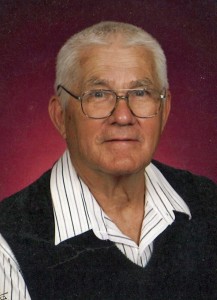 Roger David Anhalt entered the United States Army on January 5, 1954, in Des Moines, IA, served during the Korean War era and reached the rank of Specialist 3d Class before being discharged on December 21, 1955 in Fort Ord, CA.

Roger David Anhalt is buried at St. Joseph Catholic Cemetery in Waverly, Iowa and can be located at

Roger David Anhalt was born on December 21, 1933, the son of Joseph and Alice (Rhode) Anhalt in Bremer County, Iowa. He graduated from Waverly High School in 1952 and then attended AIB College in Des Moines to obtain his certification as a pressman. He entered the US Army on January 5, 1954 until his discharge on December 21, 1955 serving during the Korean War as an Assistant Squad Leader. On February 11, 1956, he was united in marriage to Mary Lucille Hart at Christ the King Catholic Church in Des Moines, Iowa. Roger worked at Waverly Publishing before moving to Des Moines and worked at Meredith Publishing for a short time. The couple then moved back to Waverly and Roger worked for Latta’s and then Condon’s in Cedar Falls. In 1973, he started his own print shop, which he continued to own and run until three years ago. He also was employed as a bus driver for WSR school district and also worked at Wartburg College as a pressman until his retirement from there in 1996.

Roger was a member of St. Mary Catholic Church in Waverly, Knights of Columbus, founding shareholder for the Waverly Archery and the American Legion. He enjoyed archery, boating and the outdoors. Roger took great pride and enjoyment teaching religious education at church. His greatest enjoyment was attending his grandchildren’s activities and spending time with his family and friends.

Mass of Christian Burial will be held on Tuesday, January 26, 2016 at 10:30 am at St. Mary Catholic Church in Waverly, Iowa with Fr. David Schatz presiding. Burial will follow in St. Joseph Catholic Cemetery in Waverly with Military rites conducted by the Waverly Area Veterans Group. Visitation will be on Monday from 4:00 pm until 7:00 pm at the Kaiser-Corson Funeral Home in Waverly. There will be a Scripture Service at 7:00 pm followed by a Knights of Columbus Rosary. Memorials may be directed to the Anhalt family for a later designation and online condolences for Roger may be left at www.kaisercorson.com.

Kaiser-Corson Funeral Home in Waverly is assisting the Anhalt family with arrangements. 319-352-1187 – See more at: http://www.kaisercorson.com/obituary/Roger-David-Anhalt/Waverly-IA/1582186#sthash.u59f8TcH.dpuf