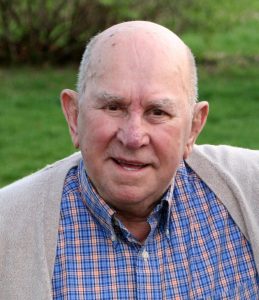 Robert Leon Bowman entered the United States Army on August 22, 1951, in Des Moines, IA, served during the Korean War era and reached the rank of Private First Class before being discharged on August 15, 1953 in Camp Carson, CO.

Robert Leon Bowman is buried at Harlington Cemetery in Waverly, Iowa and can be located at

Following his graduation from Davenport High School in 1950, Bob served in the U. S. Army from 1951-53, spending eighteen months stationed in Japan. Bob worked as a livestock buyer and farmer, owned and operated Bowman Stockyards, and then the Maid-Rite Cafe in DeWitt. He then drove semi-truck until his retirement in 2004.

Bob miraculously survived being crushed in a skid loader in 1972. Afterward, he devoted his life to spreading the gospel of Jesus through personal evangelism. His greatest desire was that everyone would spend eternity in heaven. He authored two books about a life of following Jesus, “A Chosen Life” and “A Chosen Life Study”, featuring poetry he had written through the years.

Bob enjoyed playing sports in his earlier years, and later watching them, especially the Iowa Hawkeyes. But most of all, he loved his family, and his favorite times were spent with his children and grandchildren. In 1997, he and Sylvia moved to Waverly to be closer to them. He was a Gideon and an active church member, most recently at Crosspoint Church in Waverly.

Bob is survived by his wife of nearly 58 years, Sylvia; seven children and eighteen grandchildren: David (Rita), Gregg, Carly, Caleb and Cody of Muskogee, OK; Brad (Susan), Andrew, Annabeth, Michael and Julia of Woodbury, MN; Doug of Waverly; Brian (Lori), Emma and Hannah of Des Moines; Dennis (Linda), Ben, Sam and Cooper of Cedar Falls; Brenda (Kristi Kavanaugh), Brayden, Ella and Addison of Orlando, FL; and Dee (Scott), Jacob and Catie Indresano of Waverly; a brother, Lowell “Butch” of Sun City, AZ; a sister, Mary Jo (Phil) Brooks of Yuba City, CA; and two sisters-in-law, Arlyn of DeWitt and Janet of Eldridge. He was preceded in death by his parents; siblings and spouses Betty (Lester) Beck, Barb (Dan) Elmegreen, Richard “Dick”, Bernadine (George) Rasche, Ronald “Ronnie”, and sister-in-law Beverly.
Celebration of Life Services will be at 11:30 am, on Monday, February 6, 2017, at Crosspoint Church in Waverly, with Pastor Jonathan Barthalow officiating. Burial will follow at Harlington Cemetery in Waverly. Visitation will be on Sunday, February 5, 2017, from 1:00 to 3:30 pm, at the Kaiser-Corson Funeral Home in Waverly, and also one hour prior to the service at the church on Monday. Memorials may be directed to Crosspoint Church or Western Home Communities, and online condolences may be left at www.kaisercorson.com. Kaiser-Corson Funeral Home in Waverly is assisting the family. 319-352-1187