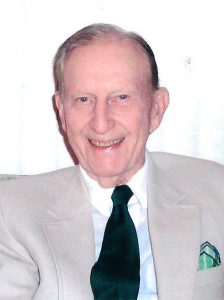 Robert Joseph Zoller entered the United States Navy on December 18, 1940, in Waverly, IA, served during the World War II era and reached the rank of Commander before being discharged on January 25, 1946 in Com. Nine.

Robert Joseph Zoller is buried at St. Mary's Catholic Cemetery in Waverly, Iowa and can be located at

Robert J. Zoller, 101, a native son who left Waverly in 1940 and returned only for brief visits since then, returned home this week to be buried near his family and friends in St. Mary Catholic Cemetery in Waverly. Mr. Zoller died on November 14, 2017, in Ocoee, Florida.

He was the son of former local businessman, John W. Zoller and Clare Reith Zoller, and the brother of Edward (Jack) Zoller and Helen Zoller O’Donnell.

Born in 1916, Bob grew up in Waverly and was well known in this community. He was one of our first Eagle Scouts, and the youngest; the last lifeguard at the old Cedar River beach in 1934, and the first at the new municipal pool the following year. By special arrangement with the American Red Cross, who waived the age requirements, he became the youngest Red Cross Lifesaving Examiner in the United States. In four summers he taught many area residents how to swim, conducted life-saving and water safety classes and coached Jim Clark and Bud Kirkland to State AAU junior diving championships. He later became Head Lifeguard at Maytag Pool in Newton.

At the University of Iowa he majored in Political Science and attended Law School. He was an honor student and President of Delta Chi fraternity. Following his graduation in 1938 he was asked to take over as Secretary of the Chamber of Commerce when Walter “Bud” Hayes resigned to run for U.S. Congress. Under Zoller’s leadership the membership nearly doubled to a total of 275, one of the largest in the state at the time. He was the youngest Chamber of Commerce executive and the youngest person listed in “Who’s Who in Iowa.”

To get an early start on World War II, Zoller resigned in 1940 and entered the U.S. Navy’s officer training program. He attended Midshipman School at Northwestern University, was commissioned in March 1941 and served five years, all in combat missions at sea. Aboard the USS Rapidan, he survived German submarine attacks while traveling in British convoys before our country entered the war. Later he took part in the Allied invasion of North Africa, and left the Rapidan just prior to its being torpedoed in 1943.

In the Pacific he was the Gunnery Officer, the Senior Watch Officer, and later the Navigator of the aircraft carrier Corregidor, taking part in seven major campaigns. At Tarawa, a torpedo fired at the Corregidor missed and hit its sister ship, the Liscome Bay which sank in sixteen minutes with the largest single-ship loss of life in our Navy’s history to that date. At Saipan, his ship survived the first kamikaze attack of the war, shooting down sixteen Japanese planes in the process. A photograph of the Corregidor in the thick of the battle has appeared in several war anthologies and in Time Magazine’s 50-year retrospective of the war against Japan which was published as a Special Issue in 1995.

After the war, Mr. Zoller retired from the Navy with the rank of Commander, returning to Northwestern University for postgraduate studies, then moved east to pursue a rewarding career in advertising, PR and marketing communications with companies in Philadelphia, Hagerstown and Niagara Falls. He retired in 1980 and moved to Sarasota, Florida.

In the 1950’s he became the recognized authority on Alaskan Malamute dogs. His “Husky-Pak” Malamutes dominated the breed, winning numerous national championships and establishing show records which still stand. He is considered as having played the major role in developing and improving this breed in its critical years, and building a small New England group of fanciers into The Alaskan Malamute Club of America, a worldwide organization of more than a thousand members today. His achievements have been featured in several books and dog publications, some as far away as New Zealand. An oil painting of Bob and four of his dogs is on permanent exhibit at the American Kennel Club’s national headquarters in New York City.

Although he has not lived here for many years, Mr. Zoller maintained a special affection for this community. In 1990, to encourage Waverly students to develop the writing skills he believed important to success in any field, he created and provided permanent funding for the Robert J. Zoller Writing Awards program. Supported by the Waverly-Shell Rock community schools and the Waverly Newspapers, this program provides annual cash awards to students who are judged winners in fiction, nonfiction and poetry.

In 1998 he established a Charitable Remainder Trust and included two local organizations, St. Mary Catholic Church and the Waverly Community Foundation, within a list of charities selected to receive future gifts when the Trust terminates on the deaths of his two children. The timing and value of the awards will be determined by the longevity of the Zoller children and the investment results attained by the professional managers of the Trust. If either his son or daughter lives to full life expectancy, conservative projections indicate that St. Mary and the community foundation each will receive in excess of $200,000.

He is survived by his son, Greg Zoller, a graduate of Michigan Tech, now living in Austin, TX; and two granddaughters. Robert was preceded in death by his parents; his wife, Aurelia in 2003; his daughter, Kristin Johnson; his brother, Edward J. Zoller; and his sister, Helen O’Donnell.

Graveside services will be held on Tuesday, November 28, 2017, at 11:00 a.m. at St. Mary Catholic Cemetery in Waverly; with full military honors conducted by the Waverly Area Veterans Honor Guard. Online condolences for Robert’s family may be left at www.kaisercorson.com. Kaiser-Corson Funeral Home in Waverly is assisting the family. 319-352-1187.