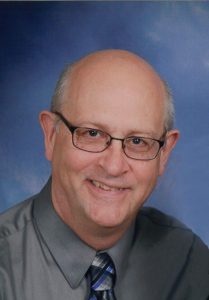 entered the United States Army on November 9, 1971, in Des Moines, IA, served during the Vietnam War era and reached the rank of Specialist Fourth Grade before being discharged on November 8, 1973 in Fort Myer, VA.

is buried at Waverly in Waverly, Iowa and can be located at

Bob was born on November 25, 1951, in Oelwein, Iowa, the son of Frederick and Rose (Faist) Klapperich. He was raised in Oelwein where he attended Sacred Heart High School graduating in 1970. After graduating Bob was drafted into the United States Army during Vietnam. On August 14, 1976, Bob was united in marriage to Barbara Purcell in Fertile, Iowa. He attended University of Northern Iowa graduating in 1979, with a business education degree. Bob then went to work at Don Bosco High School where he would teach for the next twenty-one years. After retiring from teaching Bob worked for Town & Country Homes in Waverly, Lowes in Waterloo, and was currently working at Miller True Value in Waverly.

Bob was a member of Redeemer Lutheran Church in Waverly, where he was Superintendent of Sunday School for thirteen years. He was also a past member of AMVETS and Lions Club. Bob enjoyed biking, grilling, volleyball, watching the Green Bay Packers, Iowa Hawkeyes, and Minnesota Twins, however, what he loved most was time with his family, especially his grandchildren.

Visitation will be held on Wednesday, October 17, at the Kaiser-Corson Funeral Home in Waverly where the family will greet friends from 3:30 to 7:00 p.m. Funeral services will be held at 10:30 a.m. on Thursday, October 18, at Redeemer Lutheran Church in Waverly where the Waverly Area Veterans Group will give honors. Memorials may be directed to Bob’s family for later designation and online condolences may be left at www.kaisercorson.com. Kaiser-Corson Funeral Home in Waverly assisting the family with arrangements 319-352-1187.