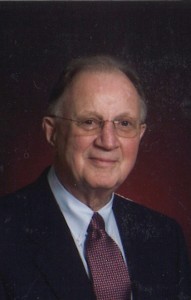 Robert Allen Rasmussen entered the United States Navy on October 9, 1943, in Minneapolis, MN, served during the World War II era and reached the rank of Radarman Second Class before being discharged on December 18, 1946 in San Diego, CA.

Robert Allen Rasmussen is buried at Harlington Cemetery in Waverly, Iowa and can be located at

Bob was born on October 22, 1925, in Albert Lee, Minnesota, the son of Russell and Rose (Miller) Rasmussen. He was raised in Clarks Grove, Minnesota and graduated from the Albert Lea High School in 1943. In October of 1943, Bob entered the United States Navy. He served during WWII on the USS Hudson and the USS Fullam and was honorably discharged in December of 1946. Bob then went to Watch Makers School in Kansas City, graduating in 1948. On April 22, 1951, Bob was united in marriage to Donna M. Eickelberg at Immanuel Lutheran Church in Waterloo. The couple made their home in Cedar Falls and Bob worked as a watch maker and jeweler at Tenenbaum’s in Waterloo until January 1, 1960, when they moved to Waverly and purchased the Tenenbaum’s Jewelry Store in Waverly.

Bob was a member of St. John Lutheran Church in Waverly, AMVETS Post #79, and Waverly Lions Club. He enjoyed golfing, sports, where he followed the Minnesota Vikings and Iowa Hawkeyes, and occasionally still working at the Jewelry Store, however, his greatest enjoyment was his family, especially his grandchildren.

Funeral services will be at 10:30 am, on Friday, July 10, 2015, at St. John Lutheran Church in Waverly, Iowa, with Pastor Versemann officiating. Burial will follow at Harlington Cemetery in Waverly. Visitation will be at the Kaiser-Corson Funeral Home in Waverly on Thursday, July 9, 2015, where the family will greet friends from 5 to 7 p.m. Memorials may be directed to St. John’s Lutheran Church or Cedar Valley Hospice and online condolences may be left at www.kaisercorson.com. Kaiser-Corson Funeral home in Waverly is assisting the family. 319-352-1187 – See more at: http://www.kaisercorson.com/obituary/Robert-Allen-Rasmussen/Waverly-IA/1526346#sthash.wZR8bkrB.dpuf