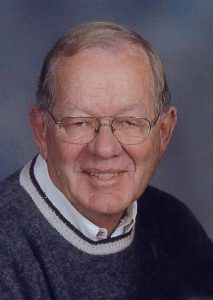 Richard Paul Oberheu entered the United States Navy on January 16, 1961, in Waverly, IA, served during the Peacetime era and reached the rank of Petty Officer Third Class before being discharged on January 14, 1963 in USS Saint Paul at Long Beach, CA.

Richard Paul Oberheu is buried at St. Paul's Lutheran Cemetery in Waverly, Iowa and can be located at

Dick was born April 4, 1937, in Waverly, Iowa, the son of Arnold and Hilda (Roloff) Oberheu. He was baptized April 25, 1937 and confirmed May 18, 1951, at St. Paul’s Lutheran Church in Waverly. He graduated from Waverly High School with the class of 1955. He served in the United States Navy from January 16, 1961 until his honorable discharge on January 14, 1963. On June 12, 1965, he was united in marriage to Marilyn J. Walther at St. Paul’s Lutheran Church in Waverly. He worked for Ramker Construction in Waverly until starting his own construction company, R.P. Oberheu Construction Inc, which he ran until 1993. He then switched careers and became a realtor and started Dick Oberheu Realty, a company he ran from 1995 until 2014. Marilyn died December 3, 2013, and Dick continued to live in Janesville until entering the Iowa Veterans Home in 2016 due to declining health.

Dick was a longtime member of St. Paul’s Lutheran Church in Waverly. He was also an active member of the Waverly Rotary Club, serving in many capacities over the years. He was an avid bird watcher, nature lover, and could fix about anything. Dick thoroughly enjoyed his group of friends, known to themselves as the “Steak Group”, that would gather each month for food and conversation. He cherished all the moments he had with friends and family.

Dick is survived by his son, daughter-in-law and two grandchildren, Jason, Deveny, Logan and Locklynn Oberheu of Janesville, one sister, Norma DeLavergne of Cedar Falls, one brother, Howard Oberheu of Warrenton, Virginia. He is preceded in death by his parents, wife Marilyn, two brothers, Vernon (Donna Kay) Oberheu and Robert Oberheu, and one brother-in-law, Rex DeLavergne.