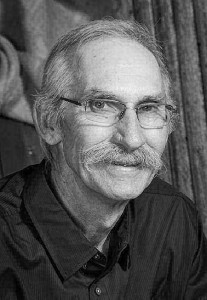 Richard Leon Kromminga entered the United States Army on February 20, 1969, in Des Moines, IA, served during the Vietnam War era and reached the rank of Specialist Five before being discharged on February 19, 1975 in St. Louis, MO.

Richard Leon Kromminga is buried at in , Iowa and can be located at

Rick was born on January 3, 1950, in Aplington, Iowa, the son of Everett and Donna (Dirkson) Kromminga. He attended elementary and junior high school in Ackley before moving to Clarksville where he graduated from the Clarksville High School in 1968. In February of 1969, Rick entered the United States Army where he served two tours in Vietnam and one in Germany. Rick was honorably discharged in October of 1971 and he returned to Clarksville and went to work for Bantam Crane in Waverly. Rick then attended Hawkeye Community College Horticulture program from 1975 to 1977. In 1977, he moved to Muscatine where he worked for the City and also for a Davenport landscaping company. On July 25, 1980, Rick was united in marriage to Susan Cuvelier at the United Methodist Church in Shell Rock. The couple made their home in Clarksville and Rick worked for the Greene rendering plant until 1984, when he went to work for Croell Redi Mix. In 1994, Rick became a full time rural carrier for the Waverly and Shell Rock United States Post offices and in 1985, Rick and Sue Moved to Shell Rock. He worked as a rural carrier until February of 2012, when he was forced to retire due to his failing health.

Rick was a member of Trinity United Methodist Church in Waverly, Shell Rock American Legion, Waverly AMVETS, and Rural mail Carriers Association. His enjoyments included fishing, hunting, golfing, and playing horse shoes; however, what he enjoyed most was hanging out with his family and friends.

Visitation will be held on Monday, October 8, at the Kaiser-Corson Funeral Home in Waverly where the family will greet friends from 4:30 to 7:30 p.m. Funeral services will be held at 3:30 p.m. on Tuesday, October 9, at Trinity United Methodist Church in Waverly with Pastors Deborah Coble-Wise and Realff Ottesen officiating. Rick will then be cremated. Memorials may be directed to either Waverly Area Veterans Post Building Project or Cedar Valley Hospice and online condolences may be left at www.kaisercorson.com. – See more at: http://www.kaisercorson.com/obituary/Richard-Leon-Kromminga/Shell-Rock-IA/1121404#sthash.cBEoMQum.dpuf