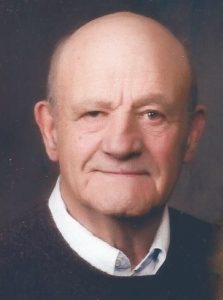 Richard Lee Beard entered the United States Army on June 18, 1957, in Des Moines, IA, served during the Peacetime era and reached the rank of Specialist 4 before being discharged on April 15, 1960 in Fort Sheridan, IL.

Richard Lee Beard is buried at Home in Sumner, Iowa and can be located at

A Celebration of Life Service will be held at 11:00 a.m. Saturday, October 15, 2016, at Faith Evangelical Church in Sumner with Rev. Shannon Perry officiating. Military rites will be provided by Thomas E. Woods Post #223, American Legion of Sumner. Visitation will be for one hour preceding the services on Saturday at the church. Memorials may be directed to the family to be designated to a charity of their choice at a later date.

Richard Lee, son of Cecil and Mabel (Stephans) Beard was born June 15, 1939, at Allen Memorial Hospital in Waterloo. He received his education in the Waterloo Schools and while at Waterloo East High School was on the football team. Dick enlisted in the United States Army in 1957 and served honorably as a paratrooper with the 11th Airborne. He was stationed in Germany until being honorably discharged in 1960. On October 20, 1963, he was united in marriage with Bernita Traeger at Salem Evangelical Church. Dick was baptized at Salem Evangelical by Rev. Beckman. He was a plumber in the area for over forty years. Dick was a longtime member of Faith Evangelical Church in Sumner. He enjoyed fishing, hunting, and rock collecting.

In addition to his wife, Bernita of Sumner, Dick is survived by his two daughters, Dawn Beard of Fayette and Lisa ( Steve) Campbell of Agency, Iowa; one grandson, Kade Campbell; two siblings, Shirley Merry and Jack Beard.

In addition to his parents, he was preceded in death by his five siblings, LaVern Beard, Clarence Beard, Beverly Shindley, Duane Beard and Gary Beard.