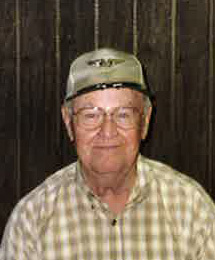 Richard John Shepard entered the United States Army on May 31, 1943, in Camp Dodge, IA, served during the World War II era and reached the rank of Staff Sergeant before being discharged on August 7, 1945 in Fort Sheridan, IL.

Richard John Shepard is buried at Oakland Cemetery in Janesville, Iowa and can be located at

Richard John Shepard, 90, of Janesville, Iowa, died on Thursday, April 30, 2015, at the Windsor Nursing and Rehab Center in Cedar Falls.

Dick was born on February 25, 1925, in the Janesville area, the son of Clarence Leslie and Anna Lenore (Zolar) Shepard. He was baptized in Janesville and attended school in Janesville, graduating in 1942. He served in the US army Air Corps from January of 1943-1945.He was united in marriage to Florence Mae Smith on July 23, 1948, at the Little Brown Church in Nashua. He worked Construction Machinery of Waterloo from 1942 until his retirement in February of 1990.

Dick is survived by his wife, Florence, nine nieces, seven nephews, and several great and great-great nieces and nephews. He was preceded in death by his parents, three brothers, and three sisters.