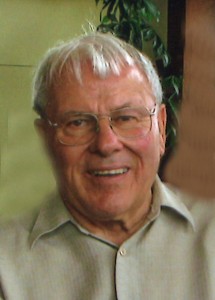 Richard “Dick” Nelson Ward entered the United States Army on September 3, 1954, in Des Moines, IA, served during the Korean War era and reached the rank of SF3 (T) before being discharged on August 31, 1956 in Fort Polk, LA.

Richard “Dick” Nelson Ward is buried at Harlington Cemetery in Waverly, Iowa and can be located at

Dick was born on September 11, 1933, in Waverly, Iowa, the son of Albert and Lorena (Nelson) Ward. He attended the Waverly School System, graduating in 1951, from the Waverly High School. In 1952, Dick began working for Rath Packing Company in Waverly. On September 3, 1954, he was inducted into the U.S. Army and on November 21, 1954, Dick was united in marriage to Sara Judisch at St. John Lutheran Church in Waverly. While Dick was in the service the couple were stationed in Ft. Smith, Arkansas and Ft. Polk, Louisiana until his discharge on August 31, 1956. The couple returned home to Waverly, where Dick went back to work at Rath Packing Company and also continued serving his country with the U.S. Army reserves until September 2, 1962. Dick worked at Rath Packing Company for 33 years, retiring in 1985, and then worked for the First National Bank of Waverly from 1985 until 2001, and then part-time for Meyer Pharmacy for one year.

Dick was a member of Trinity United Methodist Church in Waverly and was also a member of the American Legion Post #176. Dick enjoyed spending time with his grandchildren and great grand, and enjoyed all sports as he refereed basketball and football for 25 years. He also volunteered at the Waverly Health Center and blood drives for the American Red Cross.

He is survived by his wife, Sara Ward of Clarksville, Iowa; his three daughters and their husbands, Renee (Carl) Cheeseman of Reinbeck, Iowa, Rhonda (Mike) Beck of Colorado Springs, Colorado, Rebecca (Mitch) Bond of Waverly, Iowa; 7 grandchildren, Matthew and Rachael Cheeseman, Malane, Caitlin and Corey Beck, Lucas and Benjamin Bond; 5 great grandchildren; two sisters and their husbands, Marilyn (Gordon) Johnson of Cross Lake, Minnesota, Marna (Tom) Donner of Denver, Colorado; and one brother and his wife, Duane (Barb) Ward of Mesa, Arizona. Dick was preceded in death by his parents; one sister, Caroline Ward in infancy and 2 brothers, Jerry and Dan Ward.

Funeral services will be held on Tuesday, March 22, 2016, at 1:30 at Trinity United Methodist Church in Waverly, with Pastor Deborah Coble-Wise officiating. Burial will be in Harlington Cemetery in Waverly. Public visitation will be held on Monday, March 21st from 4:00 pm to 7:00 pm at the Kaiser-Corson Funeral Home in Waverly and also for an hour prior to services on Tuesday at the church. Memorials may be directed to Trinity United Methodist Church, Waverly Area Veterans Post, and WSR Booster Club. Online condolences for Dick’s family may be left at www.kaisercorson.com. Kaiser-Corson Funeral Home in Waverly is assisting the family. 352-1187