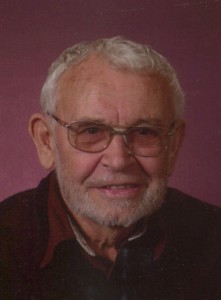 Richard (Dick) Eugene Smith entered the United States Army on October 8, 1952, in Des Moines, IA, served during the Korean War era and reached the rank of Private First Class (T) before being discharged on September 23, 1954 in Fort Carson, CO.

Richard (Dick) Eugene Smith is buried at in , Iowa and can be located at

Memorial services will be held 10:30 a.m. Friday, November 14, 2014, at the United Methodist Church in Fayette with Rev. Mee Kang officiating. Visitation will be held from 4:00 p.m. until 8:00 p.m. Thursday, November 13, at Becker-Milnes Funeral home in Fayette and for one hour preceding services at the church on Friday. Memorials may be made in his name to the Alzheimer’s Foundation or the Fayette County Historical Society.

Richard Eugene, son of Howard and Evelyn (Reed) Smith, was born March 3, 1929 at Hazelton, Iowa. He graduated from Waucoma High School in 1947 and from Upper Iowa University in Fayette with a degree in English in 1952. From 1952 to 1954 he served with the U.S. Army and was stationed in Alaska. On April 25, 1953 he was united in marriage with Marjorie Olesen at the Presbyterian Church in West Union. Dick taught briefly, and then began farming in the Fayette area and continued until retiring in 1993. He was a member of the United Methodist Church in Fayette. He was also a member of the Fayette Lions Club, Fayette County Historical Board, Upper Iowa Board of Trustees, Farm Bureau Board, and the Board of Directors at Bank First of West Union. He enjoyed playing golf, was a loyal Cubs fan, traveled extensively with his wife, and volunteered for many different things including Habitat for Humanity.

He was preceded in death by his parents; one niece, Jodie Brookhaus; and his
aunt, Antma Mildred Reed Rolf.