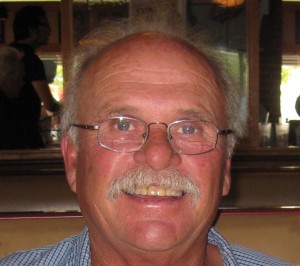 Richard Dean Kappmeyer entered the United States Marine Corps on October 1, 1969, in Des Moines, IA, served during the Vietnam War era and reached the rank of Lance Corporal before being discharged on September 22, 1971 in San Francisco, CA.

Richard Dean Kappmeyer is buried at St. John's UCC - Siegel in Waverly, Iowa and can be located at

He was a happy, people person who loved his family and worked hard all his life. He loved to dance, swim, camp, and ride his Harley. He was a big kid who was still playing construction site and was excited about the new cranes he would get to operate and the projects he built, always talking about the size of the crane and the details of the project he was working on. In the last 15 years, the house he grew up in burned to the ground, he and Tina adopted Lexi and he had a terrible motorcycle accident with a brain injury from which we were afraid he would never recover. Thankfully he did and he got the chance to meet all his grandchildren and see Lexi grow a few more years, though not even close to enough of them. After the harvest this year Rich started clearing a campsite for his family along his beloved Wapsipinicon River and was surely looking forward to many years of watching his grandchildren, Olive, George, Franklin and Lexi play in the muddy water. We are so sad he won’t get the chance. We are so sad.

He was preceded in death by his parents, Walter and Esther Kappmeyer and a brother, Bill Kappmeyer.

There will be a visitation on Sunday, November 22, 2015 from 1:00 p.m. to 4:00 p.m. at the Kaiser-Corson Funeral Home in Waverly. Cremation will follow the visitation and there will be a Memorial service on Saturday, November 28, 2015, at 10:30 a.m. at the St. John’s U.C.C.-Siegel, rural Waverly with Pastor Eugene Walther officiating. Burial of cremains will be held in the St. John’s U.C.C.-Siegel Cemetery. Memorials may be directed to the Frederika Fire Department for their 4th of July celebration.

Kaiser-Corson Funeral Home in Waverly is assisting the family. 319-352-1187 – See more at: http://www.kaisercorson.com/obituary/Richard-Dean-Kappmeyer/Frederika-IA/1564344#sthash.PFN0wbZR.dpuf