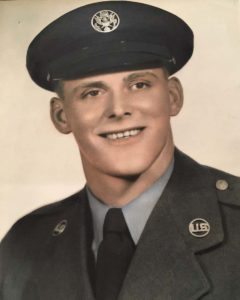 Richard Darrell Benschoter entered the United States Air Force on December 23, 1950, in Minneapolis, MN, served during the Korean War era and reached the rank of Airman Basic before being discharged on December 3, 1954 in Waverly, IA.

Richard Darrell Benschoter is buried at Harlington Cemetery in Waverly, Iowa and can be located at

Richard was born on June 19, 1930, in Winnebago, Minnesota, the son of Gerald Grant and Mabel Ruth (Dunlap) Benschoter. Dick was baptized on June 14, 1931, and later confirmed at the 1st Presbyterian Church in Winnebago, Minnesota. He attended the Winnebago School System, graduating from the Winnebago High School in 1947. Dick then attended Mankato State Teachers College from September of 1948 until May 1949. Dick served with the U.S. Air Force during the Korean Conflict from December 23, 1950, until he was honorably discharged on December 3, 1954. On April 4, 1954, Dick was united in marriage to Marlys Marie Gade at the 1st Evangelical Lutheran Church in Waterloo by Rev. Bruno Schalktenhaufen. The couple made their home in Waverly, where Dick worked for the Carnation Company from January of 1955 until October of 1957, Fareway Store from October of 1957 until October of 1967, and the Shield Bantam (Terex) Company from January of 1968 until he retired on June 19, 1995.