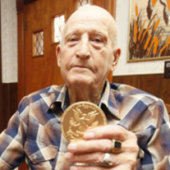 Raymond William Buchholz entered the United States Army on January 5, 1943, in Camp Dodge, IA, served during the World War II era and reached the rank of Private First Class before being discharged on October 31, 1945 in Camp Grant, IL.

Raymond William Buchholz is buried at Faith United Church of Christ Cemetery in Tripoli, Iowa and can be located at

WATERLOO, Iowa — An elite U.S.-Canadian military unit from World War II — in which two native Northeast Iowans served — is being recognized by the U.S. Congress.

Surviving American and Canadian veterans of the First Special Service Force, also known as “The Devil’s Brigade,” who fought the Nazis in Italy and southern France, will be awarded the Congressional Gold Medal, in an action approved unanimously by the U.S. House and Senate this spring and signed by President Obama in July.

The medals will be manufactured by the U.S. Mint this year and awarded to unit members in early 2014.

“You stop and think about that, in terms of being recognized, and basically the reason for that as the fact that we had so many guys killed and wounded,” Tedore, 89, said. “This is basically an honor to those guys. It sticks in my mind all the time.”

In all, more than 400 soldiers in the force were killed and more than 2,200 wounded through the war.

The gold medal news was a special birthday present for Buchholz, who will celebrate his 92nd birthday Sept. 8 at Tripoli City Hall. Like Tedore, the memory of lost comrades sticks with him. In August 1944 near Nice, France, the Jeep he was driving hit a tank mine on the way to the front. The other six soldiers riding with him were killed.

“They had their arms and legs blown off,” he said. He was the only survivor. Soldiers following in another Jeep said he was blown 50 feet in the air and landed unconscious, still clenching the steering wheel. He was hospitalized for weeks.

There are believed to be roughly 170 surviving members of the force still living in the U.S. and Canada, said Bill Woon of Helena, Mont., secretary-treasurer of the First Special Service Force Association.

His late father was a Canadian member of the force, which trained in Montana.

“The average age of these guys is 91 or 92. Some are even in their late 90s, and a couple have passed the century mark,” Woon said.

The bill was introduced in the Senate by Max Baucus, D-Mont. Charles Grassley, R-Iowa, a frequent collaborator with Baucus, was an early co-sponsor of the legislation.

“The Devil’s Brigade was the predecessor to modern Special Forces and played key roles in Italy and France in World War II. These accomplished men and Iowans deserve this recognition,” Grassley said.

The effort to get the gold medal approved did not involve lobbying as much as educating lawmakers as to who the First Special Service Force was.

“Once they realized who they were, this happened quickly,” Woon said, as companion bills in the Senate and House mustered enough co-sponsors to put the measures to a vote.

The unit fought in the January 1944 amphibious landing at Anzio, through the siege of Monte Cassino, to the capture or Rome and the invasion of southern France. In the battle of Monte La Difensa in Italy, the force sustained 77 percent casualties.

But they fought with such ferocity that the Nazis began calling them “the black devils” because of the black boot polish they wore as facial camouflage during night raids. The unit was popularized as “The Devil’s Brigade” in a 1968 movie starring William Holden and Cliff Robertson.

Tedore and Buchholz each earned five battle starts for the engagements they fought in. Tedore won the Bronze Star for valor, and Buchholz earned a Purple Heart for combat wounds.

Buchholz received special recognition in 2009 in Italy when the Winterline Venafro Association, an Italian military historic preservation group, found Buchholz’ canteen in the vicinity of Monte La Difensa, with his last name etched in it. It is on display at a museum there; his grandsons saw it during a mission trip there.

While a presentation date and venue hasn’t been determined, Woon said it is one of a few events which can take place in the U.S. Capitol rotunda. Grassley’s staff confirmed a rotunda presentation is a possibility.

Friends may greet the family 4:00 – 7:00 p.m. Wednesday, April 5, 2017, at Hugeback Johnson Funeral Home – Olson Chapel in Nashua. Visitation continues an hour prior to the service at the church in Tripoli on Thursday.

Raymond William Buchholz was born September 10, 1921, in rural Bremer County, IA, the son of Herman and Louise (Bergman) Buchholz. He received his education in rural country school near Tripoli through the 8th grade. Raymond began farming the family farm with his dad for several years before entering the United States Army. He served in the United States Army during World War II in the First Special Service Force also known as the “Devil’s Brigade” an American-Canadian commando unit where he fought in combat in Africa, Northern Italy, France, and the Liberation of Norway. He was awarded 5 Silver Star’s and The Purple Heart for Valor. In 2014 Ray was awarded the Congressional Gold Medal by the United States Government for his service with the First Special Service Force.

After returning home, Raymond was united in marriage to Joan Cosby of Sumner, IA, on December 15, 1946, at Faith United Church, Tripoli. The couple farmed east of Tripoli for many years, and Ray also worked at White Farm Equipment in Charles City. The couple moved to Nashua where Ray continued to work for White until his retirement. Joan passed away in 1986. He then met Sandy Brewer and the couple spent many years together.