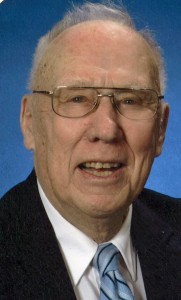 Ray “Rakie” Amos McDonald entered the United States Marine Corps on January 9, 1952, in Des Moines, IA, served during the Korean War era and reached the rank of Corporal before being discharged on June 1, 1954 in San Francisco, CA.

Ray “Rakie” Amos McDonald is buried at Harlington Cemetery in Waverly, Iowa and can be located at

Ray “Rakie” Amos McDonald, 87, of Waverly, Iowa, and formerly from Janesville, died on Friday evening, December 4, 2015, at the Bartels Lutheran Retirement Community in Waverly from complications of congestive heart failure.

Ray was born on April 30, 1928, in Plainfield, Iowa, the son of Amos Eyestone and Rose (Dos) McDonald. He was baptized as an infant, and later confirmed at St. John’s Lutheran Church in Arlington. He attended grade school in Bremer and Arlington, and then Popejoy High School, graduating in 1946. While in high school, Ray worked for many different farmers and at Jack Spratt Grocery. He then worked for the family business, Janesville Lumber until it closed.
Finally, he worked for Bowles Trucking Service until retiring in 1985.

On October 17, 1948, Ray was united in marriage to Dorothy Schmidt at St. Paul’s Lutheran Church in Waverly. On January 9, 1952, Ray was inducted into the United States Marine Corps and was stationed in Oceanside, California. Ray was released from active duty on January 4, 1954, but continued his service with the 9th Marine Corps Reserve & Recruitment District until his discharge on January 8, 1960.

Funeral services will be held on Wednesday, December 9, 2015, at 11:00 a.m. at Redeemer Lutheran Church in Waverly, with Pastor Paul Schaedig officiating. Burial will be held in Harlington Cemetery with military graveside rites conducted by the American Legion Post #522 of Janesville. Public visitation will be held on Tuesday, December 8th from 5:00 p.m. until 7:00 p.m. at the Kaiser-Corson Funeral Home in Waverly, where there will be a Masonic Service at 7:00 p.m. Visitation also for an hour prior to services Tuesday at the church. Memorials may be directed to Waverly Area Veterans Post, Honor Flight or Cedar Valley Hospice. Online remembrances for Ray’s family may be left at www.kaisercorson.com. Kaiser-Corson Funeral Home in Waverly is assisting the family. 319-352-1187 – See more at: http://www.kaisercorson.com/obituary/Ray-Rakie-McDonald/Waverly-IA/1568630#sthash.M7AwWExx.dpuf