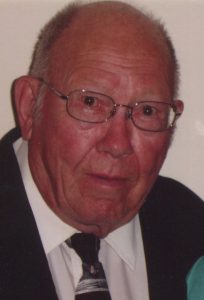 Ray Howard Roder entered the United States Army on February 4, 1953, in Des Moines, IA, served during the Korean War era and reached the rank of Corporal before being discharged on December 1, 1954 in Fort Carson, CO.

Ray Howard Roder is buried at Union Mound in Sumner, Iowa and can be located at

Funeral services will be held 11:00 a.m. Wednesday, November 30, 2016, at Faith United Church of Christ in Tripoli with Rev. Marilyn Sargent officiating. Interment will be held Wednesday, 1:30 p.m. at Union Mound Cemetery in Sumner with military rites conducted by Thomas E. Woods Post #223, American Legion of Sumner. Friends may call from 4:00 to 7:00 p.m. Tuesday, November 29th at Becker-Milnes Funeral Home in Sumner and for one hour preceding services at the church on Wednesday.

Ray Howard, son of William and Erna (Wolfgram) Roder was born July 1, 1929, at the family farm of rural, Sumner. He was baptized September 8, 1929, and confirmed March 29, 1942, at Salem Evangelical Church in Sumner and received his education in the country schools of rural Sumner. On September 30, 1947, he was united in marriage with Betty Meyer at St. Peter’s Evangelical and Reform Church in Tripoli. Ray served in the United States Army from 1953-1954 during the Korean Conflict before being honorably discharged. Ray farmed his entire life on the Roder family farm just west of Sumner. He was a long time member of St. Paul’s United Church of Christ, rural Sumner, before becoming a member at Faith United Church of Christ in Tripoli. He was a member of the Thomas E. Woods Post #223, American Legion of Sumner and the Swiss Valley Farms. Ray and Betty were rural courier carriers for many years. On June 17, 2014, Ray was able to enjoy an honor flight to Washington, D.C. He enjoyed playing cards, but his true passion was farming and time spent with family, grandchildren and great-grandchildren.

He was preceded in death by his parents, William and Erna; one brother, Paul Roder; one sister, Elizabeth Roder; one sister-in-law, Marie Mahlstedt; and two brothers-in-law, Raymond Meyer and Willis Mahlstedt.