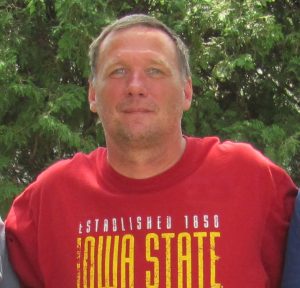 Randall Roy Sickles entered the United States Air Force on November 29, 1984, in Des Moines, IA, served during the Persian Gulf War era and reached the rank of Technical Sergeant before being discharged on November 30, 2004 in Offutt Air Force Base, NE.

Randall Roy Sickles is buried at St. Matthew's Lutheran Cemetery in Readlyn, Iowa and can be located at

Randall Roy Sickles, 49 of Dunkerton and formerly of Readlyn, passed away on Saturday, September 13, 2014 at Unity Point Health-Allen Memorial in Waterloo from an unexpected illness.

Randy was born on May 8, 1965, in Waterloo, Iowa, the son of Duane and Virginia (Sauerbrei) Sickles. He was baptized at St. Timothy’s Lutheran Church in Washburn and was confirmed at St. Matthew’s Lutheran Church, Readlyn. He attended elementary school in Readlyn and graduated from Wapsie Valley High School in 1983. He attended Ellsworth Community College, and in 1984 entered the United State Air Force. During his 20 year career in the Air Force, Randy was stationed in Sicily, Italy; Offutt A.F.B., Nebraska; Ellsworth A.F.B., South Dakota; and R.A.F. Mildenhall, England. He retired from the Air Force in 2004, while stationed at Offult A.F.B.

While stationed in Nebraska, he was united in marriage on November 11, 1989, to Brenda Bachman at St. Matthew’s Lutheran Church in Readlyn. While stationed in South Dakota, Randy and Brenda where blessed with the birth of their two children, Anna and Jacob.

Upon retiring from the Air Force, Randy and his family moved to Dunkerton, where he became involved in the community and worked for Schwan’s Home Foods in Cedar Falls. He enjoyed helping with community projects and coached youth baseball, softball and basketball in the Dunkerton area.

Randy was an avid Iowa State, Chicago Cubs and Minnesota Vikings fan. He loved watching Anna and Jacob participate in activities, and also enjoyed golfing, traveling, and playing with his puppy, “Cricket”. He was a member of St. John’s Lutheran Church at Bennington and the Peter Kress American Legion Post #636 of Dunkerton.

He was preceded in death by his father, Duane Sickles; paternal grandparents, Milton and Luella Sickles and his maternal grandparents, Walter and Anna Sauerbrei.
Funeral Service will be held on Thursday, September 18, 2014, at 2:00 p.m. at St. John’s Lutheran Church-Bennington, rural Waterloo, Iowa with Pastor William Thalacker officiating. Burial will be held in St. Matthew’s Lutheran Cemetery, Readlyn. Military Rites at the grave will be conducted by the Peter Kress American Legion Post #636 of Dunkerton. Visitation will be held on Wednesday from 4:00 p.m. to 7:00 pm at the Kaiser-Corson Funeral Home in Readlyn. Memorials may be directed to the family for a later designation. Online condolences may be left at www.kaisercorson.com