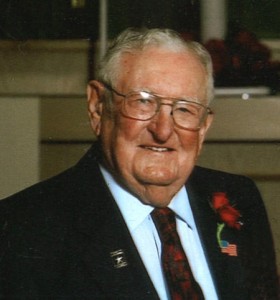 Ralph Wilson Juhl entered the United States Army on January 15, 1941, in Des Moines, IA, served during the World War II era and reached the rank of First Lieutenant before being discharged on September 21, 1945 in Camp Atterbury, IN.

Ralph Wilson Juhl is buried at Harlington Cemetery in Waverly, Iowa and can be located at

Ralph was born on April 12, 1919, in rural Plainfield in Bremer County, Iowa, the son of Anker P. and Olive M. (Wilson) Juhl. He was baptized and confirmed in the Plainfield Methodist Church, transferring his membership to Trinity United Methodist Church in 1959. He graduated from the Waverly High School in 1937. Following his schooling Ralph helped his father on the family farm before entering the U.S. Army on January 15, 1941. Ralph served with the second and fourth Armored Infantry Battalion during WWII under the command of General Patton. He was wounded in action and was transferred from a hospital in Europe back to the United States. Ralph was honorably discharged on September 21, 1945, and was awarded the Purple Heart, Combat Infantry Badge, American Defense Service Medal, and The European-African-Middle Eastern Service Medal.

Ralph and Lavon R. (Ormston) were acquaintances before the war and once Ralph returned home the couple started dating. On June 9, 1946, they were united in marriage at the Evangelical Church in Waverly. The couple made their home in Waverly. In December 1949 Ralph and his brother-in-law, Merwyn Whitney, started the Whitney-Juhl Ford Tractor Company, which operated until 1977. From 1968-1988, Ralph served on the Bremer County Board of Supervisors. In 1987, Ralph began working with McKee Realtors in Waverly until retiring in 2007.

Ralph was an active and faithful member of Trinity United Methodist Church in Waverly. He was also active in many facets of the community, local government and veterans groups. He was a life member of the AMVETS, American Legion and V.F.W. posts in Waverly. Ralph was a past State Commander of the Iowa AMVETS, past President of Iowa Association of Counties and past President of the Waverly Chamber of Commerce and a member of Rotary for many years. In his spare time he enjoyed traveling, fishing, working and making lists of “projects” to keep his six children and their spouses busy. We can’t forget that driving to and from coffee twice a day with his coffee buddies kept Ralph “occupied and busy” in the years since retirement, as did giving driving tours of his beloved town of Waverly.

Funeral services will be held on Tuesday, October 15, 2013, at 10:30 a.m. at Trinity United Methodist Church in Waverly with Pastor Deborah Wise officiating. Visitation will be held on Monday from 2:00 p.m. to 8:00 p.m. at the Kaiser-Corson Funeral Home, Waverly. Burial with Military Rites conducted by the Waverly Amvets Post #79 will be held in Harlington Cemetery, Waverly. In Lieu of Flowers memorials may be directed to Bartels Skilled Care and Rehabilitation, Cedar Valley Hospice, and Waterloo Honor Flight. Online condolences may be left at www.kaisercorson.com – See more at: http://www.kaisercorson.com/obituary/Ralph-Wilson-Juhl/Waverly-IA/1303258#sthash.9YrGfMBG.dpuf