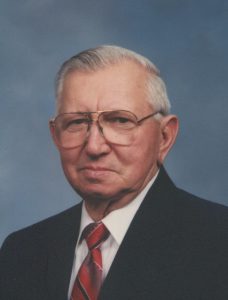 Paul Fred Zabel entered the United States Army on March 3, 1942, in Fort Des Moines, IA, served during the World War II era and reached the rank of Sergeant before being discharged on September 29, 1945 in Drew Field, FL.

Paul Fred Zabel is buried at St Johns Lutheran - Spring Fountain in Sumner, Iowa and can be located at

Services will be held 10:30 a.m. Friday, July 31, 2015, at St. John Lutheran Church-Spring Fountain of rural Sumner with Rev. George Volkert officiating. Inurnment will be at Lutheran Cemetery of Sumner Township with military rites by Thomas E. Woods Post #223, American Legion of Sumner. Friends may call from 4:00 p.m. to 7:00 p.m. Thursday, July 30th at Becker-Milnes Funeral Home in Sumner and for one hour preceding services at the church on Friday. In lieu of flowers, memorials may be made in his name to St. John Lutheran Church-Spring Fountain.

Paul Fred Zabel, son of William and Stena (Ohlendorf) Zabel, was born October 11, 1917, on a farm near Tripoli, Iowa. He was baptized at home on October 29, 1917, and confirmed April 21, 1930, at Grace Lutheran Church in Tripoli. Paul received his education in the rural Bremer County Schools. On March 3, 1942, he entered the United States Army and served as a Sgt. in the 22nd Bomb Squadron in the China-Burma-India Theater during World War II. He was honorably discharged in Sept of 1945. On May 3, 1958, he was united in marriage with Virginia Kuepker at St. John Lutheran Church-Spring Fountain by Rev. Wangerin. Paul worked for many years at Paul Niemann Construction Co. He retired and moved to Cedar Rapids in May of 1980. He was a member of Zion Lutheran Church in Hiawatha and a former member of St. John-Spring Fountain. Paul enjoyed reading the newspaper, traveling with his wife, camping, and fishing. He was also a member of the China-Burma-India Veterans Assn. and was proud to have taken an Honor Flight and return home on his 90th birthday.

In addition to his wife, Virginia of Cedar Rapids, he is survived by two children, Jerry Kuepker of Marion, Iowa and Sue (Roger) Bahe of Sumner; two grandchildren, Jonathan (Allison) Bahe of Seattle, Washington and Kimberly (Curt) Mueller of Fayette, Iowa; one great-grandson, Isaac Mueller; and two sisters-in-law, Rose Zabel of Sumner and Marcella Zabel of Fredericksburg.