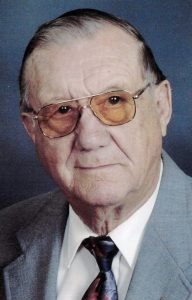 Oscar Louis Heideman entered the United States Navy on September 5, 1942, in Waterloo, IA, served during the World War II era and reached the rank of Petty Officer Second Class before being discharged on December 13, 1945 in Minneapolis, MN.

Oscar Louis Heideman is buried at St. John's United Church of Christ Cemetery-Siegel in Waverly, Iowa and can be located at

Oscar Heideman, 97, of Readlyn, Iowa passed away on Wednesday, October 3, 2018 at the Hillcrest Home in Sumner, Iowa.

Oscar Louis Heideman was born on December 21, 1920, the son of Louis and Meta (Hein) Heideman in Waterloo, Iowa. He was baptized and confirmed. Oscar attended country school up to the 8th grade and later obtained his GED. He served with the US Navy during WW II from September 5, 1942 until his discharge on December 13, 1945. On December 30, 1947, he was united in marriage to Florine Harms. Oscar and Florine managed the Bremer County Home from 1950 until retiring in 1984 and Oscar continued farming. Florine passed away on March 10. 1988. On September 1, 1990, he married Arlyce Harms.

He was a member of St. John’s United Church of Christ – Siegel rural Waverly, Iowa and Readlyn VFW. Oscar enjoyed dancing, drinking coffee and playing cards at the Center Inn in Readlyn and fishing along with his trips to Wisconsin. He and Arlyce enjoyed wintering in Texas.

Funeral services will be held on Saturday, October 6, 2018 at 11:00 am at St. John’s United Church of Christ – Siegel with Pastor Eugene Walther officiating. Burial will follow in the church cemetery with military rites conducted by the Wayne Teisinger VFW, Post 5661 of Readlyn. Visitation will be held on Friday from 4:00 pm until 7:00 pm at the Kaiser-Corson Funeral Home in Waverly, Iowa and also an hour prior to the service on Saturday at the church. Memorials may be directed to the Heideman family for a later designation and online condolences for Oscar may be left at www.kaisercorson.com.

Kaiser-Corson Funeral Home of Waverly, Iowa is assisting the Heideman family with arrangements. 319-352-1187