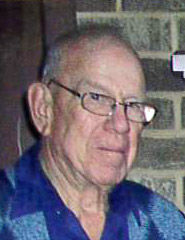 Orville Edward Fox entered the United States Army on March 25, 1944, in Camp Dodge, IA, served during the World War II era and reached the rank of Private before being discharged on June 5, 1946 in Fort Sheridan, IL.

Orville Edward Fox is buried at Harlington Cemetery in Waverly, Iowa and can be located at

Orville was born on December 15, 1925, in Aredale, Iowa, the son of Edward and Hazel (Pencuuk) Fox. He was raised in Aredale and attended Bristow Public School. When he was elven he was baptized in Lake Constantine by the Bristow Church of Christ minister. After completing his schooling Orville worked for several area farmers before entering the United States Army on March 25, 1944. During WWII Orville served in Germany where he earned two Bronze Battle Stars. He was honorably discharged on June 4, 1949. On August 18, 1950, Orville was united in marriage to Ardith McNeilus at the United Methodist Parsonage in Mason City, Iowa. The couple made their home in Waverly where Orville worked for Great Western Railroad, Kehe Construction in Waverly, and in 1951, he opened Waverly Tire where he would work for the rest of his life.

Orville was a member of the Waverly A.M.V.E.T.S. and V.F.W. His greatest enjoyment in life was his family, especially his grand and great-grandchildren. He also enjoyed playing softball, horseback riding, playing cards, and the coffee number game.

Visitation will be held on Tuesday, October 24, at Kaiser-Corson Funeral Home in Waverly where the family will greet friends from 4:00 to 7:00 p.m. Funeral services will be held at 10:30 a.m. on Wednesday, October 25, at St. Paul’s Lutheran Church and School in Waverly. Burial will follow at Harlington Cemetery in Waverly with Waverly Area Veterans Group giving honors. Memorials may be directed to St. Paul’s Lutheran School and online condolences may be left at www.kaisercorson.com. Kaiser-Corson Funeral Home in Waverly assisting the family with arrangements 319-352-1187.