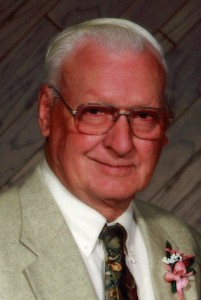 Orville Carl Jones entered the United States Army on December 4, 1953, in Des Moines, IA, served during the Korean War era and reached the rank of Private First Class before being discharged on December 2, 1955 in San Francisco, CA.

Orville Carl Jones is buried at Harlington Cemetery in Waverly, Iowa and can be located at

Orville Jones Sr., 82, of Waverly, Iowa passed away on Saturday, January 23, 2016 at the Waverly Health Center in Waverly, Iowa.

Orville Carl Jones Sr. was born on February 3, 1933, the son of Grace Jones in St. Ansgar, Iowa. He attended country school. Following his education, he helped farmers in the Greene and Shell Rock area. In 1953, he entered the US Army and was stationed in Alaska during the Korean War until his discharge in 1955. In March of 1954, he was united in marriage to Myrna Kingsley and the couple would later divorce. Following his discharge from the service, he was employed for the City of Waverly for about six years. In 1964, he started working at Carnation until retiring in 1994. On February 14, 1981, he was united in marriage to Naomi Kingsley in Waverly. She passed away on August 31, 1993.

Orville was a member of the AMETS. He enjoyed fishing, playing cards and most of all spending time with his family and friends.

Funeral services will be held on Thursday, January 28, 2016 at 10:30 am at the Kaiser-Corson Funeral Home in Waverly with Pastor Jim Lee officiating. Cremation will follow the service with inurnment at Harlington Cemetery. Honor Guard will be by the Waverly Area Veteran Group. Visitation will be held on Wednesday from 4:00 pm until 7:00 pm at the Kaiser-Corson Funeral Home in Waverly and also an hour prior to the service on Thursday. Memorials may be directed to either Cedar Valley Hospice or Waverly Area Veterans Post and online condolences for Orville may be left at www.kaisercorson.com.

Kaiser-Corson Funeral Home of Waverly, Iowa is in charge of arrangements for Orville Jones Sr. 319-352-1187 – See more at: http://www.kaisercorson.com/obituary/Orville-Carl-Jones-Sr./Waverly-IA/1583420#sthash.WFL9S8tt.dpuf