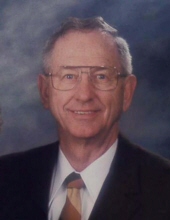 Orvel Ewald Serfoss entered the United States Army on September 6, 1945, in Fort Snelling, MN, served during the World War II era and reached the rank of Technician 5th Grade before being discharged on February 13, 1947 in Fort Sheridan, IL.

Orvel Ewald Serfoss is buried at St. Paul's Lutheran Cemetery in Waverly, Iowa and can be located at

Orvel was born on June 14, 1927, in Waverly, Iowa, the son of Fred and Meta (Schellhorn) Serfoss. He was raised in Waverly where he was baptized in 1927 and confirmed on April 11, 1943, at St. Pauls Lutheran Church. Orvel attended St. Pauls Lutheran School until the 8th grade and then the Waverly High School graduating in 1945. In September of 1945, Orvel entered the United States Army Company F332 engineers, serving in France and Germany during WWII. On February 24, 1951, Orvel was united in marriage to Selma Ide at St. Pauls Lutheran Church in Waverly. Upon returning from WWII in 1946, Orvel went to work for the United States Post Office in Waverly, where he would work for the next thirty-nine years, retiring in 1985.

Orvel was a member of St. Pauls Lutheran Church in Waverly and a fifty-year member of the American Legion Post #176 of Waverly. He also was Boy Scout Leader for many years and volunteered at the Waverly Senior Center. Orvels greatest enjoyment was time with his family, however, he also enjoyed playing cards, dancing, and fishing, where he made his own lures. He passed away wearing his favorite sweatshirt, that said, Nothing beats fishing except for being a grandpa.

Orvels memory is honored by: two daughters, Susan (Roger) Lenius of Waverly, Iowa, and Nancy Luloff of Des Moines, Iowa; son, Terry Serfoss of Cedar Falls, Iowa; five grandchildren; eleven great-grandchildren; two great-great-grandchildren; and a brother, Merrel Serfoss of Jesup, Iowa. Orvel was preceded in death by: his parents, Meta in 1953 and Fred in 1956; his wife, Selma on April 25, 2016; and a sister, Delores Hemingson in 2016.