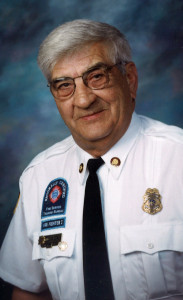 Michael John Siberski entered the United States Air Force on August 2, 1954, in Plymouth, PA, served during the Korean War era and reached the rank of Airman First Class before being discharged on May 1, 1958 in Waverly, IA.

Michael John Siberski is buried at St. Mary's Catholic Cemetery in Waverly, IA, Iowa and can be located at

Michael John Siberski Jr. was born on October 31, 1934, the son of Michael John and Anna Theresa (Pohepic) Siberski Sr. in Plymouth, Pennsylvania. He graduated from Plymouth High School. Following his education, Mike enlisted in the Air Force, serving from August 7, 1954 until his discharge on May 1, 1958. On November 6, 1955, he was united in marriage to Shirley Mae Sherburne at St. John Lutheran Church in Clarksville, Iowa. The couple moved back to Waverly in 1959 from Pennsylvania, where Mike was employed at Nestle (Carnation) for 37 years, retiring in 1997.

Mike was a member of St. Mary Catholic Church, Waverly Fire Department for 47 years, Exchange Club, VFW, and the AMVETS. He was an Iowa State fan and enjoyed attending his morning coffee group at the Fire Station.

Mass of Christian Burial will be held on Wednesday, October 15, 2014 at 10:30 am at St. Mary Catholic Church in Waverly, Iowa with Fr. David Schatz presiding. Burial will follow in St. Mary’s Catholic Cemetery with Military Honors by the Waverly Area Veterans Group. Visitation will be held on Tuesday from 4:00 pm until 7:00 pm at the Kaiser-Corson Funeral Home in Waverly and also an hour prior to the funeral mass at the church on Wednesday. Scripture service will be held on Tuesday evening at 7:00 pm at the funeral home. Memorials may be directed to either, Waverly Fire Department or Cedar Valley Hospice of Waverly and online condolences for Mike may be left at www.kaisercorson.com.

Kaiser-Corson Funeral Home of Waverly, Iowa is in charge of services. 319-352-1187 – See more at: http://www.kaisercorson.com/obituary/Michael-John-Siberski/Waverly-IA/1439430#sthash.y2MQnNin.dpuf