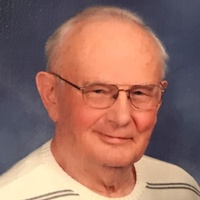 Merwin “Sam” K. Schoof entered the United States Army on October 30, 1945, in Fort Snelling, MN, served during the World War II era and reached the rank of Technician Fifth Grade before being discharged on February 12, 1947 in Fort Sheridan, IL.

Merwin “Sam” K. Schoof is buried at Harlington Cemetery in Waverly, Iowa and can be located at

Merwin “Sam” Schoof, 91, of Cedar Falls, died Friday, December 28, 2018 at NewAldaya Lifescapes. Sam was born July 21, 1927 in Waverly, Iowa, the son of Herman & Irene (Seamon) Schoof. He married Lois Burmeister on August 2, 1952 in Wausau, Wisconsin. She preceded him in death December 9, 2017. Sam graduated from Iowa State Teachers College (UNI). He taught school in Denver and at East High School in Waterloo, was a sales representative for Investor’s Diversified Service and then was a funeral director for 30 years, retiring in 1996. Sam served in the Army Security Agency of the U.S. Army during WWII.

Sam was preceded in death by his parents and wife, a son and daughter in infancy; one brother, Don Schoof and two sisters, Marjorie Ellison and Verla Lucas.

Services will be 10:30 a.m. Wednesday, January 2, 2019 at St. John Lutheran Church in Cedar Falls with burial in Harlington Cemetery in Waverly. Military Honors will be conducted by Cedar Falls AMVETS Post 49. Visitation will be from 2:00 to 5:00 p.m. Tuesday at Dahl-Van Hove-Schoof Funeral Home. In lieu of flowers, memorials may be directed to the church. Online condolences may be left at www.DahlFuneralHome.com.