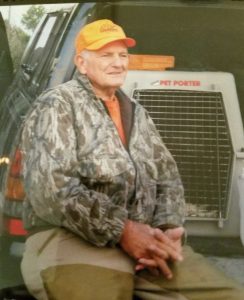 Marvin Lyle Walston entered the United States Army on September 25, 1951, in Omaha, NE, served during the Korean War era and reached the rank of Sergeant First Class before being discharged on July 1, 1953 in Camp Crowder, MO.

Marvin Lyle Walston is buried at St. Mary's Catholic Cemetery in Waverly, Iowa and can be located at

Marvin Lyle “Marv” Walston, (88) of Waverly, Iowa, passed away on Monday, May 7, 2018 at Bartels Lutheran Retirement Community in Waverly, Iowa.

Marv was born on September 5, 1929, in Maloy, Iowa, the son of Cora Mae Weese and Thomas Walter Walston. He graduated in from the Conway Consolidated High School in 1947. He then attended Northwest Missouri State College from 1947-1951. He was baptized and confirmed in May of 1951, at St. Patrick Catholic Church in Maryville, Missouri. On June 4, 1951, Marv was united in marriage to Mary Frances Sherlock at St. Patrick Catholic Church in Maryville, Missouri. Also, in 1951, Marv entered the U.S. Army, serving during the Korean War with the 7th Army Division and 49th Field Artillery Battalion, and was honorably discharge in 1953. Following the service, the couple made their home in Des Moines where Marv worked as a service representative for Firestone Tire & Rubber Company from 1953-1956. They moved to Cedar Rapids, Iowa, where he worked at Aetna Property & Casualty as a claims adjuster from 1957-1975.

Marv truly loved Waverly and all his special friends that he has made over the years. Marv has always been very active, starting the men’s over 30 basketball league in 1976, and in 1987, starting his annual Game Feeds, an event which is still happening. Marv was very active in Rotary Club, Chamber of Commerce, and was always involved with numerous fund-raising committees throughout the community. In 2001, Marv and his nephew Gary Hoover where very instrumental in building the Walston-Hoover Stadium and Marv has always been a longtime supporter of Wartburg and helping to develop the Knight’s Booster Club. In 2007, Marv was inducted into the Waverly Heritage Days “Hall of Fame”. With all this said, one of Marv’s greatest passions was hunting, a passion he shared with many of his friends.

Marv was a faithful member of St. Mary Catholic Church in Waverly. Marv was a devoted husband, father, grandfather, great grandfather and friend to many.

Kaiser-Corson Funeral Home of Waverly, Iowa is assisting the Walston family with arrangements. 319-352-1187