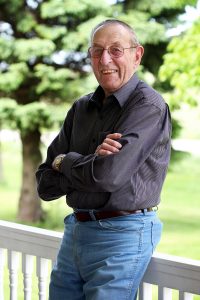 Marvin Arlo Widdel entered the United States Army on March 2, 1951, in Black Hawk County, IA, served during the Korean War era and reached the rank of before being discharged on July 5, 1951 in Camp Carson, CO.

Marvin Arlo Widdel is buried at Klinger Immanuel Lutheran Cemetery in Readlyn, Iowa and can be located at

Marvin farmed on the Widdel Family farm for 38 years. After retiring from farming he worked at Schumacher Elevator for 16 years, retiring at age 80. He was also passionate and skilled at woodworking and his craftsmanship was shared throughout the community with his family, friends and area churches.

Marvin was a lifelong member of Immanuel Lutheran Church of Klinger, Readlyn. He was also a member of the Acker-Matthias American Legion Post #653 and the Iowa Woodworkers Association. He also held various offices on the church council and served as a trustee for the Bennington Township.

He is survived by his wife, Elsie of Denver; a daughter, Kathy (Roger) Kuecker of Denver; a daughter, Donna Raedeke of Grapevine, Texas; and a son, Mark (Teddy) Widdel on the family farm, near Denver; eleven grandchildren, and twenty-four great-grandchildren; and a sister, Bernice Schumacher of Readlyn. He is also survived by Elsie’s four sisters, Ruth Bockes, Regina (Lester) Knief, Vera Evans and LaRee Hallenbach.