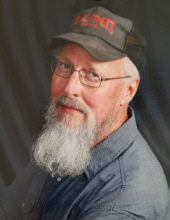 Mark Francis Brinkman entered the United States Air Force on May 26, 1962, in Des Moines, IA, served during the Vietnam War era and reached the rank of Airman Second Class before being discharged on May 25, 1966 in Dyess Air Force Base, TX.

Mark Francis Brinkman is buried at at a place yet to be determined in Janesville, Iowa and can be located at

Mark was born on September 29, 1944, in Charles City, Iowa, the son of Gesina Christina (Eilers) and Chris J. Brinkman. He was baptized and later confirmed at St. James Lutheran Church in Allison. Mark attended school in Allison and graduated from Allison High School in 1962. After he graduated, Mark entered the United States Air force where he served until his honorable discharge in 1966. On August 5, 1967, Mark was united in marriage to Linda L. Lantz at the Methodist Church in Greene. Mark started his career with John Deere in 1966 and retired in June of 2004. Prior to retiring, Mark was proud of his final project with Deere where he traveled to Toronto, Canada as a consultant in the design of the robotic cab weld line. While working at John Deere, Mark also worked as the YWCA Camp Ranger and then the camp caretaker at the Girl Scouts camp, both near Janesville.

Mark was a member of Messiah Lutheran Church in Janesville and served on the Janesville City Council for many years. He enjoyed fishing and H.O. model trains. But most of all, Mark loved time with his grandkids and family time, especially at the lake.

Mark is survived by his wife of 52 years, Linda; three children, Michelle Lehr of Janesville, IA, Kris Brinkman of Waverly, IA and Sara (Brad Johnson) Mullinix of Hazleton, IA; four grandchildren, Shelby, Dawson, Lillian and Jameson; and a brother, Darrel (Janell) Brinkman of Hampton, IA. He was preceded in death by his parents; stepfather, Bill Schneiderman; and grandson, Taylor Lehr.

According to his wishes, Mark’s body has been cremated. Memorial services will be held at 11:00 a.m. on Tuesday, September 10, 2019, at Messiah Lutheran Church in Janesville with Pastor Katie Rodriguez officiating. Visitation will be one hour prior to the service at the church on Tuesday. Memorials may be directed to Mark’s family for later designation. Online condolences may be left at www.kaisercorson.com. Kaiser-Corson Funeral Home in Waverly is assisting the family. 319-352-1187